'We Need To Restore Faith In City Government By Offering Reasonable, Innovative And Compassionate Solutions To The City’s Most Pressing Issues'

The Boy Meets World alumni filed paperwork with the Federal Election Commission to run for California’s 30th District for the House of Representatives as a Democratic party candidate.

It is unclear if Savage will primary Schiff as the incumbent representative is speculated to seek a Senate seat in 2024 representing California in the United States Senate, according to a November Politico report.

Savage, who has lived in West Hollywood for eighteen years, previously ran for office in the Los Angeles City Council in November though finished in seventh place, securing 6.32% of the final vote.

The Boy Meets World alumni said he was running for L.A. City Council “because there are serious challenges ahead and West Hollywood deserves sensible, honest and strong leadership to face them.”

“The city is facing serious challenges around public safety, struggling businesses, inflation and the cost of housing. We need new leaders with a fresh perspective who are ready to begin tackling these issues,” he added. “We need to restore faith in city government by offering reasonable, innovative and compassionate solutions to the city’s most pressing issues.”

“We need to increase and expand access to all the great opportunities West Hollywood affords, by ensuring that every member of the community has the tools they need to succeed.”

“California needs a warrior in the Senate—to stand up to special interests, fight the dangerous imbalance in our economy, and hold so-called leaders like Mitch McConnell accountable for rigging our democracy,” Porter said. “To win these fights, it’s time for new leadership in the U.S. Senate.”

“California deserves a Senator with a record of accomplishment and a progressive vision,” Lee said in a statement. “While the United States Senate is sorely lacking the presence of people of color, Black women in particular, today I am focused on helping Californians stay safe in this extreme weather and fighting the House Republicans extreme agenda.”

Feinstein, who will be 91 in 2024, has not publicly confirmed if she will seek reelection. However, the California Senator said she would “make an announcement concerning [her] plans for 2024 at the appropriate time” though added that “everyone is of course welcome to throw their hat in the ring.” 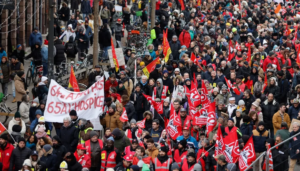