In a Monday video, Arizona Gubernatorial candidate Kari Lake said the Arizona midterm election was “botched and broken beyond repair.”

“Forty days ago, elections in Arizona officially started when mail-in ballots were sent out across our state,” said Lake in her statement. “Election Day was 13 days ago and Maricopa County is still counting ballots.”

“Printer problems, tabulation errors, three-hour lines or longer, and confusing instructions given by election officials made this Election Day the most chaotic in Arizona’s history,” Lake said of reported voting irregularities. “Half of voting centers that opened for the first time on Election Day — where the overwhelming majority of voters were voting for Kari Lake — were not operational or had significant failures.”

My message to the People of Arizona & the United States: pic.twitter.com/mtNBl7728S

“Would you get on a plane if half of the engines didn’t work?” the gubernatorial candidate asked. “Would our friends in the media be able to broadcast their nightly propaganda if half of their studio equipment was not working?”

“The 2022 general election in Arizona was botched and broken beyond repair. Thankfully, the Attorney General’s office is demanding answers from Maricopa County. Attorney General Mark Brnovich is taking the first steps necessary to remedy this assault on our democracy.”

This isn’t about Republicans or Democrats. This is about our sacred right to vote. A right that many voters were, sadly, deprived of on November 8th. Tens of thousands have reached out pleading with me to fight for them. Rest assured, I will. If we give up now, we will no longer have a country. Attorneys are working diligently to gather information, whistleblowers are coming forward and the curtain is being lifted. Whether done accidentally or intentionally it is clear tat this election was a debacle that destroyed any trust in our elections. Arizonans who chose to make their voice heard on Election Day shouldn’t be disenfranchised or punished for choosing to vote in-person. Yet they were.

“I want you to know, Arizona, I will continue fighting until we restore confidence and faith in our elections.”

“Arizonans know BS when they see it,” said Lake in a late Monday tweet appearing to suggest she suspected voter fraud.

Arizonans know BS when they see it.

“When we called for Katie Hobbs to recuse herself, they ridiculed us. It turns out we were right,” Lake said in a video last Thursday discussing irregularities in Arizona’s midterm. “The fox was guarding the henhouse and because of that voters have been disenfranchised.”

“Arizonans deserve a full report and accounting of the myriad problems that occurred in relation to Maricopa County’s administration of the 2022 General Election,” read the letter. “As the canvass is looming, and these issues relate to Maricopa County’s ability to lawfully certify election results – the Unit requests a response to the aforementioned issues on or before Maricopa County submits its official canvass to the Secretary of State, which must occur on or before November 28, 2022.” 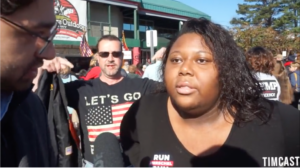