In an interview with CNN, former UK Prime Minister Boris Johnson claimed Germany hoped that Ukraine would suffer a quick defeat during the onset of the war, suggesting that genuine economic concerns informed their position.

Former PM Johnson — who stressed that Germany’s position was grounded in realism and related to the economic situation — said that the country’s leadership felt “at one stage that if it were going to happen, which would be a disaster, then it would be better for the whole thing to be over quickly, and for Ukraine to fold.”

Johnson, for his part, said he disagreed with the German position but understood that they were informed by “all sorts of sound economic reasons” and thought that it was an error in judgment. “I couldn’t support that, I thought that was a disastrous way of looking at it. But I can understand why they thought and felt as they did,” he said.

Taking to task the preparedness of his respective colleagues in Italy, the United States, and other major nations, Johnson admitted that there was simply no option to preempt a Russian invasion.

“What happened was everybody – Germans, French, Italians, everybody, Joe Biden – saw that there was simply no option. Because you couldn’t negotiate with this guy. That’s the key point,” he said.

With winter on the horizon, experts have suggested that energy shortages might prove disastrous for European countries that have, through a mix of environmental and economic policies, found themselves dependent on Russian energy.

Reports forecasting the outlook in countries like Germany and the United Kingdom have gone so far as to caution citizens to prepare for intermittent blackouts if power grids are unable to meet energy demands. France — which, through a mixture of intentional closures and derelict conditions, shuttered most of its nuclear reactors — has sought alternative sources of energy in preparation for the coming months. 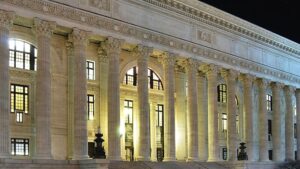