Police in Kenya are investigating the death of an LGBTQ activist whose decomposing body was discovered inside a metal box.

The body of Edwin Chiloba was found on a road in Uasin Gishu County in the western region of Kenya. A motorcycle taxi operator told police at a nearby roadblock he saw a vehicle without license plates dump the box.

Chiloba operated a fashion business in Uasin Gishu County according to the Kenya Human Rights Commission (KHRC), which confirmed the activist’s death.

“He was brutally killed & dumped in the area by unknown assailants,” KHRC tweeted on Jan. 6. “It is truly worrisome that we continue to witness escalation in violence targeting LGBTQ+ Kenyans.”

“This is reprehensible & deeply unjust. Everyday, the human rights of LGBTQ+ persons are being violated with little consequence for perpetrators,” the organization continued. It called on the nation’s Directorate of Criminal Investigations and the National Prosecution Authority to take action to “ensure the killers are apprehended & prosecuted.”

“This is a frightening crime but it’s becoming common in Kenya — evidence of a growing epidemic of violence in the country,” said the KHRC. “The govt must reinforce legal protections against non-discrimination based on sexual orientation or gender identity.”

Under Kenyan law, gay sex is a criminal offense that carries a 14-year prison sentence. The nation’s high court upheld the law in May 2019 after the justices ruled they did not believe the policy violated citizens’ basic human rights. The anti-homosexual sex laws were initially enacted under British colonial rule but were kept in place after Kenya gained independence.

“The law is rarely enforced but discrimination is common,” reports News 24. “Research suggests acceptance of homosexuality is gradually increasing in Kenya, but it remains a taboo subject for many. The country’s film board has banned two films for their portrayals of gay lives in recent years.”

Chiloba was last seen by his sisters at a popular nightclub on New Year’s Eve.

“My brother arrived at Tamasha Place where I work around 10 pm on Saturday, December 31, 2022, to usher in the New Year, and around 1 am after the new year fireworks, we met and celebrated together,” his sister Melvin Faith told reporters outside the Moi Teaching and Referral Hospital where Chiloba’s family identified his body. “He bid me farewell saying he would miss me.”

The victim’s family became concerned after his phone either was turned off or died.

A suspect in Chiloba’s murder is currently in custody. Police are reportedly searching for two more people in connection to the crime. 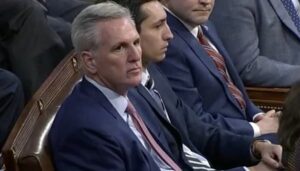