Biden Speaks on the Anniversary of the January 6th Capitol Riots

President Biden spoke to the nation on the one-year anniversary of the Capital Riots, acknowledging the divide in America.

On Thursday, President Biden spoke from the nation’s Capitol about the events of January 6, 2021, saying the American people and lawmakers must decide what kind of nation they will be.

The speech heavily took aim at his predecessor, former President Donald Trump — though he never said his name.

The President spoke to ongoing tensions with GOP leaders as he remarked that some have defected from their own party.

“Some courageous men and women on the Republican Party are standing against it, trying to uphold the principle of that party. Too many others are transforming that party into something else. They seem no longer to want to be the party, the party of Lincoln, Eisenhower, Reagan, the Bushes. Whatever my other disagreements are with Republicans to support the rule of law and not the rule of a single man, I will always seek to work together with them. To find shared solutions where possible, because we have a shared belief in democracy, then anything is possible. Anything.”

When referencing the rioters who breached the Capitol, he said, “They came here in rage. Not in service of America, but rather in service of one man. Those who incited the mob, the real plotters who were desperate to deny the certification of this election, defy the will of the voters.”

Biden made direct remarks about former President Trump, but referred to him only as “the former president.”

“Here’s the truth: A former President of the United States of America has created and spread a web of lies about the 2020 election. He’s done so because he values power over principle. Because he sees his own interest as more important than his country’s interest, and America’s interest. And because his bruised ego matters more to him than our democracy or our Constitution. He can’t accept he lost even though that’s what 93 United States senators, his own attorney general, his own vice president, governors, and state officials in every battleground state have all said he lost,” Biden said.

President Biden told listeners that countries like China and Russia are betting that American Democracy is failing.

“They’ve actually told me democracy is too slow, too bogged down by division to succeed in today’s rapidly changing complicated world. They’re betting that America is a place for the autocrat, the dictator, the strongman,” he added.

Biden spoke directly to the controversy of the 2020 election, sharing concerns over the “misinformation” being spread by the former administration.

“The election of 2020 was the greatest demonstration of democracy in the history of this country. More of you voted in that election than have ever voted in all of American history. Over 150 million Americans went to the polls and voted that day — in a pandemic, some at great risk to their lives. They should be applauded, not attacked,” Biden said.

“The former President and supporters have decided the only way for them to win is to suppress your vote and subvert our elections. It is wrong. It’s undemocratic. And frankly it’s un-American,” Biden added.

Biden went on to say that the former President “held a dagger to the throat of America” amid the controversy.

He concluded his speech vowing to restore unity and calling America to come together for the nation’s good. 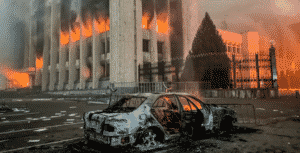