Thousands have been arrested after days of protesting and violent clashes

Kazakh President Kassym-Jomart Tokayev requested support from the country after clashes on Jan. 5 resulted in dozen of civilian and police deaths.

Protestors took issue with the nation’s authoritarian leadership and the high fuel prices.

“Tens of thousands of people, some reportedly carrying clubs and shields, have taken to the streets in recent days in the worst protests the country has seen since gaining independence from the Soviet Union three decades ago,” reports SFGate. “Although the demonstrations began over a near-doubling of prices for a type of vehicle fuel, their size and rapid spread suggest they reflect wider discontent in the country that has been under the rule of the same party since independence.”

On Jan. 4, protestors pulled down a statue of Nursultan Nazarbayev, a former Communist party official who has controlled the country since the fall of the Soviet Union. Nazarbayev picked Tokayev to serve as his successor in 2019 but still holds the title of “leader of the nation.”

Spokeswoman Saltanat Azirbek told state news channel Khabar-24 that  “dozens of attackers were liquidated” – a term used to describe the deaths of alleged extremist people by law enforcement. Police fired into a crowd of approximately 200 protesters during the face-offs.

The nation’s Interior Ministry has told the media at least 2,000 people have been arrested.

Twelve officers have been confirmed dead in the capital city of Nur-Sultan, and another 353 have been injured, according to reports from local media.

At least one police officer was found beheaded.

The president and Russian officials have blamed the violence of foreign terrorists. They have not offered any specific intelligence verifying this claim. The number of Russian paratroopers deployed is not yet known.

The support forces are working to regain control of Almaty, the nation’s largest city where buildings were burned during protests.

The secretariat of the Russian-led Collective Security Treaty Organization announced the troops have “already begun to fulfill their assigned tasks,” per Reuters.

“President Tokayev has vowed to use force to put an end to the protests, after concessions earlier Wednesday, including dismissing his government and reversing the fuel price rise, failed to quell them,” reports ABC News.

Russia says it is closely monitoring the situation and has told other countries not to intervene in Kazakhstan, which is in its sphere of influence. 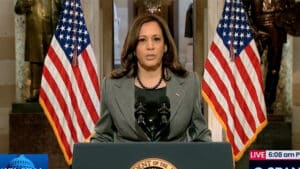