“Certain dates echo throughout history,” Harris said. “Including dates that instantly remind all who have lived them where they were and what they were doing when our democracy came under assault. Dates that occupy not only a place on our calendar but a place in our collective memory. Dec. 7, 1941, Sept. 11, 2001, and Jan. 6, 2021.”

"We cannot let our future be decided by those bent on silencing our voices, overturning our votes and pedaling lies and misinformation." Vice President Kamala Harris reflects on the January 6 insurrection one year after the riot at the Capitol. https://t.co/rpXu5RvPBQ pic.twitter.com/DP7MfPGCiC

Harris: “Certain dates echo throughout history…certain dates which remind the people who lived through them where they were and what they were doing when our democracy came under assault.” pic.twitter.com/IOw14WMEcK

“On January 6 we all saw what our nation would look like if the forces who seek to dismantle our democracy are successful: the lawlessness, the violence, the chaos,” she continued.

“I wonder how will Jan. 6 will be remembered in the years ahead. Will it be remembered as a moment that accelerated the unraveling of the oldest, greatest democracy in the world, or a moment when we decided to secure and strengthen our democracy for generations to come?” Harris asked.

“The American spirit is being tested,” she added. “The answer to whether we will meet that test resides where it always has resided in our country: with you.” 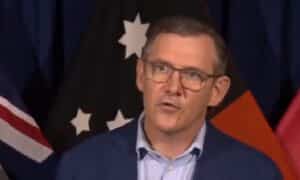 Northern Territory of Australia Puts Unvaccinated on Near Total Lockdown