“CBP said that 188,829 migrants were encountered at the southern border, an increase from the 180,034 encountered in May,” Fox News reported. “It is also a sharp rise since when President Biden took office — there were 78,442 encounters in January.”

“More illegal immigrants were encountered at our Southern border last month than in any month in over 20 years: 188,829,” House Minority Leader Kevin McCarthy (R-CA) wrote on Twitter. “These encounters have increased every single month that Joe Biden has been president. The Biden Border Crisis is getting worse.”

 🚨BREAKING —> More illegal immigrants were encountered at our Southern border last month than in any month in over 20 years: 188,829

These encounters have increased every single month that Joe Biden has been president. The Biden Border Crisis is getting worse. pic.twitter.com/WlxsGiOHwJ

Illegal immigration began to surge after Biden dedicated the beginning of his time in office to weakening border security. For example, in mid-February, Biden issued a Memorandum that made the Immigration and Customs Enforcement (ICE) “functionally abolished,” according to the Washington Post.

The record-breaking illegal immigration levels have overwhelmed facilities at the border, with one facility reaching 729% capacity in March and forcing children to sleep on the floor. According to reports earlier this year, children apprehended at the border are kept by the Biden administration in facilities “akin to jails” for “an average of 120 hours,” nearly double the legal limit.

“Migrant children are being forced to sleep on gym mats with foil sheets and go for days without showering as the Border Patrol struggles to handle thousands of young Central Americans who are surging across the southwestern border, some of them as young as a year old,” The New York Times reported. “Many of the children interviewed by … lawyers in recent days said they had not been allowed outdoors for days on end, confined to an overcrowded tent.” 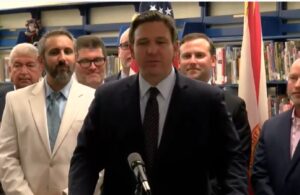