The Florida House of Representatives granted final passage to legislation that would end Disney’s tax privilege and self-governing power earlier in the day, sending the bill to Governor Ron DeSantis to sign.

Biden addressed the issue while speaking at a fundraiser in Oregon. It was the first time that he had addressed the Disney controversy.

“This is not your father’s Republican Party,” Biden said during the event, at one point also suggesting that the “far right has taken over the party.”

“It’s not even conservative in a traditional sense of conservatism. It’s mean, it’s ugly. I mean, look at what’s happening now in Florida: Christ, they’re going after Mickey Mouse.”

The battle between the GOP and Disney began after the entertainment giant publicly condemned Florida’s Parental Rights in Education law, which was misleadingly labeled the “Don’t Say Gay” bill by opponents. In protest of the legislation, the company suspended political donations in the state and vowed to instead support organizations working to oppose the law.

The law prohibits the teaching of gender identity or sexual orientation to students in third grade and below.

Since 1967, Disney has operated its own government covering over 27,000 acres around Walt Disney World in Florida — known as the Reedy Creek Improvement District. As Timcast explained in a previous report, under Florida law, Disney can control their own water, power, and emergency services.

“I don’t think there’s another special taxing district in the state that I’m aware of that has the ability to construct their own nuclear power plant. I think that’s something that’s unique to Disney,” Republican House Speaker Chris Sprowls said on Tuesday.

Florida Governor Ron DeSantis is unlikely to veto the bill, which will have massive tax implications for Disney.

“I was shocked to see some of the stuff that’s in there. They can do their own nuclear power plant. Is there any other private company in the state that can just build a nuclear power plant on their own?” DeSantis said during a press conference on Tuesday. “They’re able to do certain things that nobody else is able to do. So I think they’re right to be looking at this and reevaluating and having an even playing field for everybody, I think is much better than basically to allow one company to be a law onto itself.”

“They are applying this bill only to affect Reedy Creek and not The Villages. This is political retribution. They are punishing Disney for speaking out against them on ‘Don’t Say Gay,'” Guillermo said, according to a report from WESH.

In 2020, Biden said that he would vote for Mickey Mouse over former President Donald Trump.

“I’d vote for Mickey Mouse against Donald Trump,” Joe Biden says when asked if Sen. Sanders can win against Pres. Trump. “I don’t think he can beat Donald Trump and get a Democratic Senate and keep a Democratic House … we have to be able to win and win Senate seats as well.” pic.twitter.com/YFpH4sIUx9

“I’d vote for Mickey Mouse against Donald Trump,” Joe Biden said after being asked if he thought Sen. Bernie Sanders had a chance of winning. “I don’t think he can beat Donald Trump and get a Democratic Senate and keep a Democratic House … we have to be able to win and win Senate seats as well.” 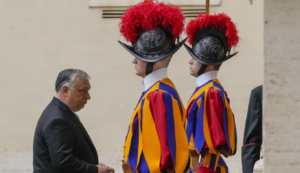