Pope Francis gave the prime minister a medal of St. Martin of Tours

Orbán met with the head of the Catholic Church privately in the pontiff’s library in the Vatican’s Apostolic Palace.

The Vatican did not release a statement following the meeting, which lasted about 45 minutes.

“A video released by Vatican television showed the pope giving Orban a medal of St. Martin of Tours, a fourth century French saint who was born in what is today Hungary,” reports Reuters. “According to legend, St. Martin cut his cloak in half and shared it with a beggar.”

“I chose this for you … I thought of you Hungarians who are now receiving the refugees,” Francis told the prime minister.

This is the second time in a 12-month period that the pair has met. The September 2021 meeting, however, was noted for its tension and awkwardness.

During a mass he conducted in Budapest, Pope Francis urged the nation to “extend its arms towards everyone.” The comment was largely believed to be a critique of Orbán’s anti-immigration policies and his opposition to admitting Syrian refugees into his country in 2015.

The Pope also minimized his time in Hungary, spending approximately seven hours in its capital before departing for Slovakia.

Francis was described as “jovial” during this year’s meeting with Orbán.

The United Nations Refugee Agency estimates that just over 4 million people have left Ukraine since the nation was invaded by Russia on Feb. 24.

A week after the invasion began, Orbán spoke to reporters in Beregsurány, a Hungarian border town where Ukrainians had begun arriving.

“Hungary is a good friend of Ukraine and the Ukrainian people. If they need any help, we are here and they can count on us,” Orbán said.

At the end of March, the agency reported that over 354,041 Ukrainians had arrived in Hungary. Others went to Poland, Romania, Moldova, and Slovakia.

“May God bless you, your family and Hungary,” Pope Francis said to the Hungarian leader at the end of the encounter.

“Your Holiness, we are waiting for you,” Orbán replied. 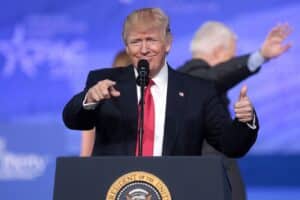