Parents who were separated from their children after illegally crossing the Unites States-Mexico Border may undergo psychological testing following a request from the Biden administration.

The testing could be used to show the trauma inflicted on migrant parents by the “zero-tolerance policy” enacted by President Donald Trump in 2018.

The policy aimed to discourage anyone from illegally crossing the southern border to gain access to America, including those who may be seeking asylum.

Unlike previous administrations, family units apprehended while unlawfully crossing the border were no longer exempt from being detained. Prior to the early 2000s, family units were typically released into America with an immigration court hearing date.

Under the zero-tolerance policies, adult illegal immigrants were detained and charged for illegally entering the U.S. Because children who illegally enter the country with their parents can only be detained for 20 days, the Department of Health and Human Services’ Office of Refugee Resettlement is tasked with finding appropriate care for them. This could mean placing them in the custody of a relative already in the country, in foster care, or in a temporary detention center.

The DHHS is also responsible for providing medical care and educational programs for children in its custody.

Trump ended the zero-tolerance policy in June of 2018. Six days later, a judge granted a request brought by the American Civil Liberties Union to formally prohibit the policy. Approximately 5,500 children were separated from their parents.

The children involved in the separation could also be required to undergo psychological evaluations if deemed necessary by attorneys representing the Justice Department.

The administration’s request is part of an ongoing lawsuit brought against the government by migrants who are seeking compensation. Reportedly, the Biden administration had considered giving every affected person $450,000.

The possible settlement, the negotiations for which stalled last November, was opposed by several Republican lawmakers.

“As you can imagine, many Americans think it’s a pretty outrageous idea to offer massive taxpayer-funded payments to illegal immigrants who broke our laws, particularly in the middle of a record-shattering border crisis that this administration has created,” Iowa Senator Chuck Grassley told Homeland Security Secretary Alejandro Mayorkas during a Judiciary Committee hearing.

President Joe Biden rejected claims that the settlement would include $450,000 per person payouts, but expressed his support for some compensation for migrant families.

“Whether [the border crossing] was legal or illegal, and you lost your child … you lost your child, it’s gone — you deserve some kind of compensation, no matter what the circumstance,” he told Fox News correspondent David Spunt during a heated exchange.  “What that will be … I have no idea.”

The ACLU in turn suggested Biden “may not have been fully briefed about the actions of his very own Justice Department” in a subsequent statement.

Lee Gelernt, deputy director of the ACLU Immigrants’ Rights Project who represents the migrant plaintiffs in the lawsuit, rebuked the Biden administration for calling for psychological evaluations.

“President Biden called the Trump family separations criminal and a moral stain on the nation, but now his administration is hiring doctors to try and claim the families didn’t suffer all that much,” Gelerent told AP News on Sept. 28.

The Justice Department said in a court document obtained by the outlet that “it is standard practice for plaintiffs alleging severe emotional injury to be examined by the opposing party’s expert.” 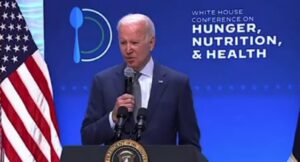