President Biden is seeking to reinstate his vaccine mandate for health care workers through an emergency application to the Supreme Court.

U.S. Solicitor General Elizabeth Prelogar filed two applications with the Court on Dec. 16, asking the justices to pause two lower court decisions that blocked the mandate in a total of 24 states.

In a September executive order, Biden had mandated any medical facilities that receive federal funding require all of its employees to get the COVID-19 vaccine. Hospitals, nursing homes, and health care centers have until Jan. 4 to prove their workforces were fully vaccinated to continue to receive funding.

The Centers for Medicare & Medicaid Services mandate would have impacted 17 million health care workers across the United States.

U.S. District Judge Matthew Schelp, who ruled on the Missouri case, said that “the nature and breadth of the CMS mandate requires clear authorization from Congress — and Congress has provided none.”

He upheld the state’s request to block the mandate.

A ruling from U.S. District Judge Terry A Doughty said the Biden administration had acted outside the bounds of its authority.

“If the executive branch is allowed to usurp the power of the legislative branch to make laws, two of the three powers conferred by our Constitution would be in the same hands,” the judge wrote. “If human nature and history teach anything, it is that civil liberties face grave risks when governments proclaim indefinite states of emergency.”

“During a pandemic such as this one, it is even more important to safeguard the separation of powers set forth in our Constitution to avoid erosion of our liberties,” Doughty added.

The 5th Circuit Court of Appeals in New Orleans reversed the ban on Dec. 15, allowing the mandate to remain in place in 14 states that had originally challenged the requirement with a federal lawsuit in Louisiana.

“The move is the latest sign that Mr. Biden is scrambling to get his vaccine mandates back on track after a series of setbacks,” reports The Washington Times.

In its appeal to the Court, the Biden administration said the mandate could “save hundreds or even thousands of lives each month.”

“Indeed, it is difficult to imagine a more paradigmatic health and safety condition than a requirement that workers at hospitals, nursing homes, and other medical facilities take the step that most effectively prevents transmission of a deadly virus to vulnerable patients,” the application said.

The government also added, “The vaccine requirement falls squarely within the plain text of the Secretary’s [of Health and Human Services] statutory authority and complies with all procedural requirements.” 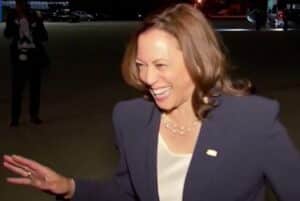 White House Says Biden Will Run With Harris Again in 2024