The Biden administration has determined that Saudi Arabian Crown Prince Mohammed bin Salman has immunity from a lawsuit over the killing of Washington Post reporter Jamal Khashoggi.

Khashoggi was murdered and dismembered by Saudi agents at the Saudi consulate in Istanbul. The Cental Intelligence Agency has determined that the killing was ordered by the Prince Mohammed.

The lawsuit in question was brought on by Khashoggi’s fiancée Hatice Cengiz and the group Khashoggi founded, Democracy for the Arab World Now.

The journalist had been highly critical of the Saudi Arabian leader in his reporting.

According to a report from Reuters, Justice Department attorneys wrote in a document filed in the U.S. District Court for the District of Columbia that “the doctrine of head of state immunity is well established in customary international law.”

The lawyers wrote that the Biden administration “determined that defendant bin Salman, as the sitting head of a foreign government, enjoys head of state immunity from the jurisdiction of U.S. courts as a result of that office.”

According to a report from Axios, “a State Department spokesperson said in an emailed statement the Justice Department filed the ‘suggestion of immunity,’ at the request of the State Department, ‘based on longstanding and well-established principles’ of law.”

“This Suggestion of Immunity does not reflect an assessment on the merits of the case. It speaks to nothing on broader policy or the state of relations. This was purely a legal determination,” the spokesperson added, according to the report.

In a subsequent tweet, written in Arabic, Cengiz added, “May God have mercy on the pure soul of Jamal.”

In July, President Joe Biden was filmed fist-bumping the prince.

“The fist bump between President Biden and Mohammed bin Salman was worse than a handshake — it was shameful. It projected a level of intimacy and comfort that delivers to MBS the unwarranted redemption he has been desperately seeking,” Washington Post publisher and CEO Fred Ryan said in a statement at the time.

The determination is non-binding, and whether or not immunity is granted will ultimately be left for a judge to decide. 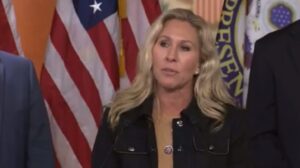