Texas gubernatorial candidate Beto O’Rourke was escorted out of a press conference about the Robb Elementary School shooting on Wednesday after an outburst aimed at current Governor Greg Abbott.

O’Rourke claimed that the shooting, which left 19 children and two adults dead, was “totally predictable” and that the governor was “doing nothing.”

“Families are broken apart, hearts are forever shattered all Texans are grieving with the people of Uvalde, and people are rightfully angry about what has happened,” Abbott said during the conference, adding that, “events like this they tear at the fabric of a community.”

“Our job is to ensure community is not ripped apart,” Abbott continued, before providing more details about what happened during the horrific tragedy.

Abbott fought back tears as he explained how prior to the massacre at the school, the shooter had shot his own grandmother in the face and she called 9-1-1.

“Anyone who shoots his grandmother in the face, has to have evil in his heart,” Abbott said. “But it is far more evil for someone to gun down little kids. It is intolerable and it is unacceptable.”

As Abbott went to pass the microphone to Lt. Gov. Dan Patrick, O’Rourke stood up, began shouting, and started to approach the stage.

“This is on you”, O’Rourke said, pointing at the governor.

Officials on the stage attempted to shout the Democratic candidate down and demand that he leave the building.

Uvalde Mayor Don McLaughlin was heard calling O’Rourke a “sick son of a b-tch” for his antics.

O’Rourke was escorted out of the premises minutes later.

While many asserted that his actions were inappropriate, others offered praise and encouraged people to be more confrontational — including Texas State Rep. Gene Wu.

How are we supposed to be polite while our children are murdered?

We have to stop accepting this slaughter as par for the course.

“I’m proud of @BetoORourke! How are we supposed to be polite while our children are murdered? We have to stop accepting this slaughter as par for the course. Confront every state leader!” Wu tweeted.

Fred Guttenberg, the father of a 14-year-old girl who was killed in the Parkland school shooting, also praised O’Rourke and referred to him as a “hero.”

You are my hero @BetoORourke. From the bottom of my heart, for my daughter Jaime and all victims of gun violence, thank you. pic.twitter.com/zW3msBSmo3

“You are my hero @BetoORourke . From the bottom of my heart, for my daughter Jaime and all victims of gun violence, thank you,” he wrote. 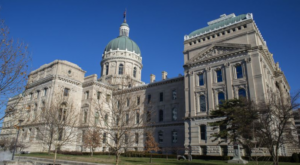