BACK TO THE USSR: Poll Shows Majority of Registered Dems Prefer Socialism to Capitalism

A new poll published by Fox News Thursday shows a majority of registered Democrat voters prefer the socialist model to American capitalism, highlighting a growing split in the party between traditional moderates and hard-core progressives.

The poll — taken between August 7th and 10th — reveals 59% of registered Democrats have a positive view of socialism, compared to just 49% who had a favorable opinion about capitalism.

The survey also shows 44% of Democrats have an unfavorable view of capitalism compared to 31% who harbor negative opinions about socialism.

“The trend toward socialism among Democrats comes at a time when members of Congress such as self-described democratic socialists Rep. Alexandria-Ocasio-Cortez, D-N.Y., and Sen. Bernie Sanders, I-Vt., have had a growing influence on Democratic politics. Sanders, as chair of the Senate Budget Committee, has been leading a charge to pass a $3.5 trillion budget reconciliation bill that he says is aimed at addressing wealth inequality,” reports Fox News.

“That bill would provide for government-funded programs such as tuition-free pre-K and community college, as well as the expansion of Medicare, which Sanders ultimately would like to be changed to a universal socialized health care system,” adds Fox. 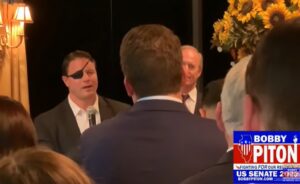