Scott Adams has been called a leading critic of the Environmental, Social, and Governance framework

The daily cartoon strip will no longer appear in 80 markets.

“It was part of a larger overhaul, I believe, of comics, but why they decided what was in and what was out, that’s not known to anybody except them, I guess,” Adams told Fox News.

“Dilbert,” which first appeared on April 16, 1989, satirizes white-collar, American office culture and features the titular engineer. Since its first release, the cartoon has appeared in more than 2,000 newspapers across 57 countries and is printed in 19 languages.

In recent years, Adams’ work has poked fun at Environmental, Social, and Governance (ESG) issues as they related to the workplace and corporate America.

In one cartoon published on Sept. 15, Adams compared ESG to a “colicky” baby with “firehose diarrhea.”

In May, Adams introduced the comic’s first black character, Dave – who is named for Adams’ brother and decribed as a “prankster.” Dave identifies as white and often spars with his boss, who is fixated on his diversity quotas.

The boss tells Dave he is being promoted to CTO to “boost [the] company’s ESG rating” in a Sept. 20 comic strip.

“I know you identify as white, so that won’t help out ESG scores but would it be too much trouble to identify as gay?” The boss asks.

“Depends on how hard you want me to sell it,” Dave replies.

Adams had previously told his fans that “he had not included a black character in the comic strip before because every character must have a personality flaw, and he feared being accused of racism,” per Breitbart.

Critics denounced the character’s introduction as “anti-trans” while others called Adams  a “full-on right wing bigot.”

Some of my critics have decided my new Dave character is about trans (it isn't.) Others criticize me for having only one Black character (this is the reason why). Still others question my relevance (while being unable to ignore me). Fun day! https://t.co/EY2QuBWnp8

“What I do is I talk about how the employees handle the situation. It’s not about the goal of it. But that’s enough to make people think that I must be taking sides politically,” the cartoonist said while speaking with Fox.

Adams has indicated his ESG commentary influenced Lee Enterprises’ decision to stop printing his comic. He noted that some newspapers had received complaints and had expressed concern about the content.

“All of the wokeness and anything that permeated from ESG … that stuff made its way into the business world, and then it became proper content for Dilbert,” Adams told the outlet. “The problem is that people see that even though it’s a workplace-related joke, but it’s more about how they implement it.”

In a recent report calling Adams the “Voice of ESG Opposition,” Bloomberg noted that ESG is “so hardwired into financial markets” that “ESG-related assets are likely to exceed $50 trillion by 2025, when they will represent more than one third of the projected $140.5 trillion in total global assets under management.”

“But these realities aren’t stopping Republicans from focusing on what they see as some of the underlying hypocrisies of ESG,” the outlet stated. “In some ways, the criticisms leveled by Adams and his fictional characters have come to be emblematic of that position.”

Adams shared a photo of the article on Twitter, noting its publication coincided with Lee Enterprises’ decision to stop publishing “Dilbert.”

The timing of Dilbert getting cancelled by 77 newspapers (one large chain) is probably a coincidence. pic.twitter.com/kN0h9zrkbd

Lee Enterprises publishes 77 newspapers in 26 states. On its website, the company notes that its digital and print products “reach 75% of the adults in our largest markets each week.” More than 1 million people subscribe to a newspaper owned by Lee Enterprises. 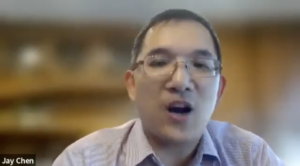