The officer did not receive a punishment despite being found guilty

The United States Army convicted an officer who refused to comply with COVID-19 regulations for violating lawful orders.

The officer, 1st Lieutenant Mark Bashaw, was found guilty of refusing to work from home, failing to get COVID-19 tested before reporting to his office and refusing to wear a mask while indoors.

Bashaw served as the headquarters commander at the Army Public Health Center. He has also served as a noncommissioned officer in the Air Force.

He is the first service member to be court-martialed and convicted of violating the COVID-19 mitigation that the Department of Defense issued during the pandemic.

The judge did not issue Banshaw a punishment despite the verdict.

While at the Aberdeen Proving Ground in Maryland, all unvaccinated soldiers were required to wear masks while indoors

While other service members have been disciplined for not complying with COVID-19 protocols, there has been no other known court-martial.

Colonel Yevgeny Vindman, a high-ranking lawyer for the branch’s Communications-Electronics Command, celebrated Branshaw’s conviction on Twitter with the tag “order and discipline” and noted he was “proud of the prosecution team at Aberdeen Proving Ground.”

Proud of the prosecution team at Aberdeen Proving Ground. Secured a first in the nation conviction at court-martial of a lieutenant who failed to obey lawful orders re COVID mitigation measures. Guilty on all 3 counts. #orderanddiscipline

In total, the Army reports 2,531 cases of refusal and 3,381 official reprimands. There were also 426 soldiers who were separated from the Army “for refusing the lawful order to receive the COVID-19 vaccine.”

Other branches of the military have dealt with both legal and administrative conflicts while enforcing the DOD’s vaccination mandate for service members.

“There were 35 members of the Navy special warfare community who became the first service members to have their religious exemptions recognized by a court,” reports Task and Purpose. “There were two Marines who soon followed. There have also been Navy destroyers unable to deploy with a captain who was unvaccinated — in that case, a judge prevented the service from taking any administrative action.”

The trial concluded on April 29. Neither Branshaw nor representatives for the Maryland garrison have said if he will remain with the Army.

The conviction could impact his ability to secure employment outside of the military. 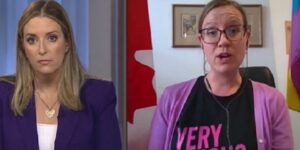 Canada Says American Women Can Travel There For Abortions (VIDEO)