Canada Says American Women Can Travel There For Abortions (VIDEO)

The Minister of Families, Children and Social Development of Canada has announced that American women are invited to travel to Canada for abortions if the Supreme Court overturns Roe v. Wade.

The Supreme Court is poised to overturn the rule, according to a leaked opinion draft obtained by Politico.

Overturning Roe would not criminalize abortions in itself, but would turn the issue back to the states to decide on laws.

Speaking to the CBC News Network on Tuesday, Families Minister Karina Gould said that Americans will be permitted to get abortions in Canada if it is banned in their states.

“I don’t see why we would not,” she told host Vassy Kapelos after he asked about Americans getting the procedure there. “If they, people, come here and need access, certainly, you know, that’s a service that would be provided.”

Will the Canadian government allow American women to come to Canada for an abortion? Families and Social Development Minister Karina Gould says: “I don’t see why we would not.” pic.twitter.com/1YxedPp6XC

Earlier in the day, Canadian Prime Minister Justin Trudeau reaffirmed his support for abortion on Twitter — though he did not specifically mention the Supreme Court draft.

In the draft opinion obtained by Politico, Justice Samuel Alito wrote, “Roe was egregiously wrong from the start. Its reasoning was exceptionally weak, and the decision has had damaging consequences. And far from bringing about a national settlement of the abortion issue, Roe and Casey have enflamed debate and deepened division.”

“We hold that Roe and Casey must be overruled,” said the document titled “Opinion of the Court.” “It is time to heed the Constitution and return the issue of abortion to the people’s elected representatives.”

Gould not only said that Americans could get abortions in Canada, she also expressed concern that Canadian women in border areas would not be able to access the procedure in Canada.

A spokesperson for Gould confirmed to the CBC following the interview that Americans can get abortions in Canada, but they have to pay for them — whereas they are free for Canadians.

“Americans accessing health care services in Canada would continue to have to pay for the service out-of-pocket or by their own private insurance if they are not covered by a provincial health insurance, by the Interim Federal Health Program or Non-Insured Health Benefits,” the spokesperson said. 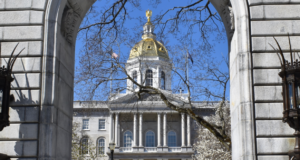