American Airlines and Boom Supersonic announced an agreement for the airline to purchase up to 20 Overture aircraft.

Overture will carry between 65 to 80 passengers at Mach 1.7 (twice the speed of today’s fastest commercial aircraft), giving American the ability to fly passengers around the world in half the time on more than 600 routes.

“Looking to the future, supersonic travel will be an important part of our ability to deliver for our customers,” Derek Kerr, American’s Chief Financial Officer said in a press release. “We are excited about how Boom will shape the future of travel both for our company and our customers.”

American says passengers will fly from Miami to London in less than five hours, and from Los Angeles to Honolulu in only three hours.

Currently, federal law prohibits operation of civil aircraft at speeds greater than Mach 1 over land, to prevent exposure to sonic booms. So, the company’s new supersonic jet will only fly at supersonic speeds over the ocean.

Boom is transforming air travel with Overture, which is optimized for speed and safety, and will run on 100 percent sustainable fuel.

The first rollout for the independently developed supersonic jet is slated for 2025, while the first passenger flights will be in 2029.

Passengers will get a unique view of the earth, as the jet cruises along at an altitude of 60,000 — nearly twice the height commercial airliners fly at today.

“We are proud to share our vision of a more connected and sustainable world with American Airlines,” said Blake Scholl, Founder and CEO of Boom. “We believe Overture can help American deepen its competitive advantage on network, loyalty and overall airline preference through the paradigm-changing benefits of cutting travel times in half.”

Groundbreaking for the factory that will assemble, build, and flight test Overture aircraft is located in Greensboro, North Carolina. 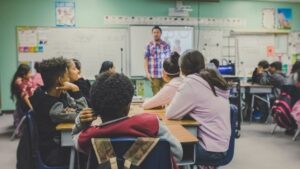