The American Civil Liberties Union spoke out against the Federal Bureau of Investigation after it raided properties associated with Project Veritas and its founder, James O’Keefe.

“The precedent set in this case could have serious consequences for press freedom,” Hauss said. “Unless the government had good reason to believe that Project Veritas employees were directly involved in the criminal theft … it should not have subjected them to invasive searches and seizures. We urge the court to appoint a special master to ensure that law enforcement officers review only those materials that were lawfully seized and that are directly relevant to a legitimate criminal investigation.”

The statement was not a positive review of the organization, which is known for its investigative journalism. Hauss said Project Veritas has been involved in “disgraceful deceptions” and added that “reasonable observers might not consider their activities to be journalism at all.”

The raids are part of the FBI’s investigation into President Joe Biden’s daughter Ashley’s stolen diary.

A copy of the diary was published in October by National File, who said a whistleblower identified the diary as that of the 39-year-old first daughter. Reporter Patrick Howley, who previously exposed a yearbook photo of former Virginia Governor Ralph Northam in blackface, broke the story.

Tipsters gave Project Vertias the diary a year earlier, but the organization was unable to independently verify its authenticity. Project Veritas then turned the diary over to law enforcement.

“We do not know how the New York Times was aware of the execution of a search warrant at our reporter’s home or the subject matter of the search warrant as a grand jury investigation is secret,”  “The FBI took materials of current, former Project Veritas journalists despite the fact that our legal team previously contacted the Department of Justice and voluntarily conveyed unassailable facts that demonstrate Project Veritas’ lack of involvement in criminal activity, and or criminal intent. I’ve heard ‘the process is the punishment.’ I didn’t really understand what that meant until this weekend. I wouldn’t wish this on any journalist. If they can do this to me, if they can do it to any journalist.”

“The Times has its own longstanding feud with Project Veritas, after the conservative group published a series of undercover tapes of Times employees in 2017,” notes The Daily Mail.

President Biden has previously said he would not tolerate the Justice Department seizing a journalist’s records.

“It’s simply, simply wrong,” he told Kaitlan Collins of CNN in May. “I will not let that happen.” 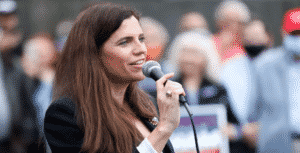