Legislation that would decriminalize marijuana at the federal level was introduced by Republican lawmakers in the House on Nov. 15.

South Carolina Representative Nancy Mace has led the effort, which would regulate the drug more similarly to alcohol. It would also end legal hazards that inhibit cannabis-related businesses.

If passed, the States Reform Act would let states — not the federal government — regulate and prohibit marijuana as they see fit.

According to US News and World Report, “it would prohibit marijuana use by those under 21, restrict advertising, protect access to hiring and benefits for veterans who have used cannabis and expunge the records of people convicted on nonviolent, cannabis-only related offenses.”

“This bill would also support businesses, in particular small businesses. That’s very important,” Mace said at a news conference. “If we were to pass this bill today … businesses would operate and be legal and regulated just like alcohol.”

Mace, who is serving her first term, called the bill a “compromise” following more burdensome legislation proposed by Democrats.

“This legislation, I believe, has something good for everyone, whether you’re a Democrat or a Republican,” Mace told reporters.

Cannabis would no longer be considered a Schedule I drug under the Controlled Substances Act. Accordingly, possession of the substance would not be a criminal offense.

“The measure also would allow for expungement of federal convictions in nonviolent cases and provide a framework for federal regulation and enforcement in states that allow the sale of marijuana,” per NBC News.

The bill includes a 3% excise tax on cannabis, which is substantially below the 25% tax proposal from the Senate. Mace said this was intended to prevent the formation of “illicit markets.”

The Senate has also proposed that the Food and Drug Administration regulate marijuana. The Treasury’s Alcohol and Tobacco Tax and Trade Bureau would be tasked with regulating marijuana under the States Reform Act.

While five other Republicans are co-sponsoring the bill, Mace’s bill was denounced by Drew McKissick, the chair of the South Carolina GOP.

About 68% of Americans support legalizing marijuana, according to a recent Gallup Poll. Democrats are more open to the change, with 83% in favor compared to 50% of Republicans.

Marijuana has already been legalized in 18 states and has been approved for medical use in 37 states. It is, however, illegal under federal law. 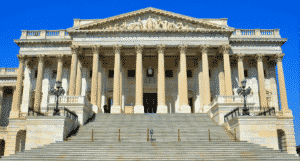