Tejera was just 37 years old at the time of his death.

.@RachelvScott reports on the sudden passing of Dax Tejera, the Executive Producer of @ABCThisWeek. In a memo to employees, @ABC President Kim Godwin said that Dax’s passion and love for the show shined every Sunday morning. pic.twitter.com/Cl7P5EJ1O5

Tejera took on the role of executive producer of This Week with George Stephanopoulos in 2020. He had a wife named Veronica and two young daughters.

Such a heartbreaking day for all of us at @abcnews Dax Tejera was not only the brightest – most compassionate – executive producer I’ve ever worked with, he was also a dear friend. On this Christmas Day, my thoughts are with his wife, Veronica and his two baby daughters. pic.twitter.com/HXFKrfaZXE

It’s with a heavy heart and great sadness that we share that our friend and colleague, Dax Tejera passed away suddenly of a heart attack last night.

As EP of “This Week with George Stephanopoulos” Dax’s energy, passion and love for that show, ABC News, and you, shined every Sunday morning. That same love was extended to his precious girls.

Our thoughts are with his wife, Veronica, the couple’s two young daughters, and the entire Tejera family.

We will share more details in the coming days.

On this Christmas Eve, hug your loved ones a little tighter. And please lean on each another.

ABC has been in litigation for denying religious exemptions for the vaccine.

WOW: ABC has lost TWO producers in the last week:

Erica Gonzalez was an ABC producer that #diedsuddenly along with Dax Tejera. 💉💉

ABC has been in litigation for denying religious exemptions for the 💉

They were requiring ALL ABC employees to be injected💉💉— no exceptions. pic.twitter.com/CBT03irctm

ABC Producer Erica Gonzalez passed away the week before Tejera. Her cause of death has not been revealed at this time. 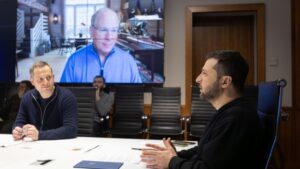