Ukrainian President Volodymyr Zelenskyy says that his country will be participating in an upcoming World Economic Forum (WEF) event in Davos, Switzerland, and that he and BlackRock CEO Larry Fink forged an agreement to finance the rebuilding of Ukrainian infrastructure.

Zelenskyy and Fink held a video conference meeting as a follow-up to months of work between BlackRock Financial Markets Advisory and the Ukranian Ministry of Economy. The two leaders agreed to focus on “coordinating the efforts of all potential investors and participants in the reconstruction of our country, channelling investment into the most relevant and impactful sectors of the Ukrainian economy,” according to a statement from the Ukranian President’s Office.

BlackRock manages roughly $8 trillion in client assets, is listed as an organizational partner of the WEF, and met with the leadership of Ukraine in September 2022 to discuss how to drive public and private investments into Ukraine.

“We’ve shown that we know how to win on the battlefield. Another important task for us is to achieve victories in the economy as well, and to be an attractive country for investors,” Zelenskyy said during the meeting, according to an official readout.

Officials say that Zelenskyy emphasized that Ukraine is seeking to attract global capital to create new jobs and facilitate growth of the country’s economy.

“The investment attractiveness of our country is of particular importance,” Zelenskyy said. “It’s important to me that a structure like this be successful for all parties involved. We are capable, and we want to restore a normal investment climate.”

Zelenskyy said his country will be participating in the next WEF summit in Davos, where officials will present Ukraine’s future prospects to the global community, per a statement from Interfax.

Ukraine has been battered by the ongoing conflict with Russia, with its economy projected to shrink by about 40 percent this year, the New York Times reported.

Ukraine’s National Bank issued a statement Dec. 27 advising that though the banking system has remained “highly liquid” since Russia’s invasion in February 2022, “the working environment remains challenging for financial institutions.” 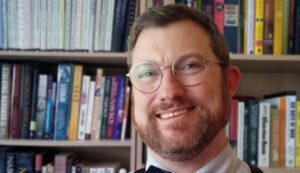