5.5 Million Illegal Aliens Have Crossed Into the U.S. Under the Biden Administration

In Fiscal Year 2022, CBP had 2,766,582 million migrant encounters, nearly a million more illegal aliens processed than the year prior. For comparison, that single FY22 figure represents roughly the same amount of illegal immigration that occurred during all four years under President Trump combined (3,004,925).

CBP released the latest figures amid little fanfare, with a late night dump around midnight on a Friday in late October.

“In typical fashion, the Biden administration attempted to conceal the reality of a historic crisis they created by releasing final FY 2022 border numbers late on a Friday evening, hoping in vain that no one would notice on the eve of consequential midterm elections. After digging through them, we can see why,” said Dan Stein, president of the Federation for American Immigration Reform (FAIR).

Data released by CBP show a 15 percent increase in migrants from the month prior. Nearly three-fourths of all southwest land border encounters involved single adults. However, unaccompanied child encounters rose five percent month-over-month, from 11,341 in August to 11,900 in September.

“Some 2.7 million migrants—those who illegally entered or were otherwise inadmissible at a port of entry—were encountered at our borders in FY 2022, bringing the total under President Biden to a whopping 5.5 million. One thing is clear: These record-breaking numbers are a direct consequence of open-borders policies implemented by Homeland Security Secretary Alejandro Mayorkas and the person who appointed him, President Joe Biden,” charged Stein. “This deliberate sabotage of our nation’s immigration laws demands that the president remove Mayorkas from his position immediately. Otherwise, the impeachment of his disgraced cabinet member is sure to be one of the first orders of business in the next Congress.”

One report showed that providing for the needs of the illegal aliens who have come into the U.S. during Biden’s tenure will cost taxpayers an additional 20.4 annually. A separate report found that the annual expenditure for providing remedial English instruction to illegal alien minors — as required by law — will now top $78 billion. 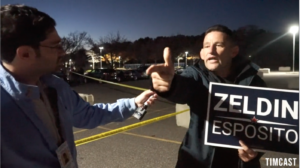