Ukrainian President Volodymyr Zelenskyy claimed in an interview shortly after his address to the US Congress on Wednesday that World War III “may have already started.”

The comment is part of a teaser for an NBC interview scheduled to be released on Wednesday evening.

Zelenskyy was commenting about President Joe Biden’s concern that too much US involvement could lead to WWIII.

“Nobody knows whether it may have already started and what is the possibility of this war, in case Ukraine will fall,” Zelensky said.

“It’s very hard to say and we’ve seen this, 80 years ago when the second World War has started, and there were similar tragedies in history, nobody would predict when the full scale war would start and who would put an end to it. In this case we have the whole civilization at stake,” he continued.

Zelenskyy has been repeatedly begging for the US to get more involved in the conflict, specifically by enforcing a no-fly zone over the nation. This would, of course, mean US troop involvement and entry into the conflict.

The Ukrainian leader also commented about Biden pulling back his offer to provide fighter jets — due to the risk of increasing conflict with Russia.

“I need to protect our skies,” Zelenskyy said.

Zelenskyy is not the first Ukrainian leader to suggest that we may be in the beginning stages of WWIII.

Earlier this month a Ukrainian member of parliament claimed that “World War III has already started” during an appearance on Fox News.

The lawmaker, Alexey Goncharenko, appeared on Fox & Friends First to urge the United States to provide his country with more weapons.

Host Trace Gallagher was discussing how the US was “hesitant” to put boots on the ground in the conflict, out of concern that it could spark World War III.

“The World War III already started. If somebody doesn’t see it, it’s their problem,” Goncharenko said. “It’s war, not against Ukraine, but against the whole free world.”

Just 35 percent of Americans support US military action supporting Ukraine if it risks nuclear conflict with Russia, according to a newly released poll.

However, as Timcast reported in February, nearly 70 percent of self-described “liberals” believe that it is more important to “America’s national interest” to defend the Ukrainian border than our own. 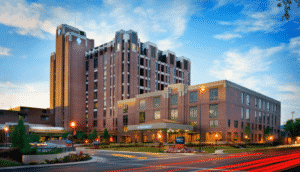