'Your Money Is Not Charity. It's An Investment In The Global Security And Democracy That We Handle In The Most Responsible Way' Said Zelenskyy

Senators Rand Paul from Kentucky, Josh Hawley of Missouri, and Utah’s Mike Lee also skipped Zelenskyy’s address to Congress, per one NBC News reporter. Massie, along with the Senators, have previously expressed criticism over Ukraine aid.

“I’m in DC but I will not be attending the speech of the Ukrainian lobbyist,” said the Kentucky representative.

I’m in DC but I will not be attending the speech of the Ukrainian lobbyist.

“On my way to the US to strengthen resilience and defense capabilities of,” tweeted Zelenskyy on Wednesday.

“In particular, [President Biden] and I will discuss cooperation … I will also have a speech at the Congress and a number of bilateral meetings.”

On my way to the US to strengthen resilience and defense capabilities of 🇺🇦. In particular, @POTUS and I will discuss cooperation between 🇺🇦 and 🇺🇸. I will also have a speech at the Congress and a number of bilateral meetings.

“This battle is not only for the territory – for this or another part of Europe. This battle is not only for life, freedom and security of Ukrainians or any other nation, which Russia attempts to conquer,” said Zelenskyy during a Wednesday speech to both chambers of Congress. “This struggle will define – in what world our children and grandchildren will live and then – their children and grandchildren. It will define whether it will be a democracy – for Ukrainians and for Americans – for all.”

Our two nations are Allies in this battle. … They have an advantage in ammunition. They have much more missiles and planes than we ever had. They threw everything against us – similar to the other tyranny, which in the Battle of the Bulge threw everything it had against the free world. Just like the brave American soldiers, which held their lines and fought back Hitler’s forces during the Christmas of 1944, brave Ukrainian soldiers are doing the same to Putin’s forces this Christmas. … And your support is crucial – not just to stand in such fights, but to get to the turning point. To win on the battlefield. We have artillery. Yes. Thank you. Is it enough? Honestly, not really. … I believe there should be no taboos between us in our alliance. Ukraine never asked the American soldiers to fight on our land instead of us. I assure you that Ukrainian soldiers can perfectly operate American tanks and planes themselves.

“I would like to thank you for both, financial packages you have already provided us with, and the ones you may be willing to decide on. Your money is not charity. It’s an investment in the global security and democracy that we handle in the most responsible way,” Zelenskyy said. “I thank President Biden and both parties at the Senate and the House – for your invaluable assistance.” 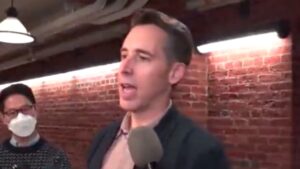 Hawley: FBI Officials 'Should Go to Jail' For Election Interference