Hawley: FBI Officials 'Should Go to Jail' For Election Interference

U.S. Senator Josh Hawley (R-Mo.) says that officials from the FBI should face jail time for any role they may have played in interfering in multiple U.S. elections.

Hawley was speaking with reporters in a hallway at the Capitol and noted the FBI’s involvement with a dossier that was used as the basis for the now disproven allegations that former President Donald Trump colluded with the Russian government in 2016.

He also highlighted the FBI’s lead role in suppressing news regarding potentially illegal material found on the laptop of Hunter Biden as well as files detailing possible crimes that could implicate his father, President Joe Biden.

“The idea that the FBI who laundered the Steele dossier back in 2016 through the courts, lied to a [Foreign Intelligence Surveillance Act] court in order to extend their wiretaps that they never should have gotten in the first place. Then in 2020, deliberately suppressed the Hunter Biden story,” Hawley remarked. “Remember, the FBI had the Hunter Biden laptop for a full year before the story broke. They knew all about it. They had all the emails, knew it was true, and yet put out there that it was Russian disinformation.”

Hawley is among a growing chorus of voices calling for reform of the FBI following a series of revelations that the Agency pressured social media companies — and in some cases, paid them — to censor content on behalf of the government, a possible violation of the U.S. Constitution’s First Amendment.

In a bid to increase transparency, thereby rebuilding trust in the company, billionaire CEO Elon Musk has provided access to Twitter’s internal documents to independent journalists who have been combing through the files and adding their own reporting to assemble an accurate account of the U.S. government’s attempts to censor social media.

Those reporters have used Twitter posts as the format to release documents showing that the lines between “government” and “business” were strongly blurred. The FBI was intertwined with the social media giant, and had so many “former” agents working at Twitter, they created their own channel on the communications app Slack to onboard new FBI arrivals.

“That’s unbelievable stuff,” Hawley told reporters. “There have gotta be repercussions for that, or we’re not gonna have a democracy.”

When asked why no one has gone to jail, Hawley said, “I don’t know, but somebody should go to jail for it.”

He added: “And we’re going to have to have, clearly, a conversation about the future of the FBI and what it’s doing in our democracy, because that kind of power, the kind of power that they have is immense. And if they’re going to use it in this way, then I have to say, I think our constitutional order is not secure, and I’m very concerned.” 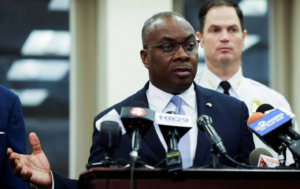