While fielding questions for Dr. Anthony Fauci, White House Press Secretary Karine Jean-Pierre shut down a reporter for speaking out of turn during a Tuesday press briefing.

Jean-Pierre snapped at the Daily Caller’s Diana Glebova for “yelling” her question asking Fauci, director of the National Institute of Allergy and Infectious Diseases (NIAID), what he did to investigate the origins of COVID-19.

“We have a process here,” Jean-Pierre said. “I’m not calling out on people who yell.”

The Press Secretary reprimanded Glebova, suggesting she was being disrespectful to Fauci and fellow reporters.

“I will not call on you if you yell,” Jean-Pierre said before suggesting Glebova was taking time away from other reporters.

“I’m done,” said the Press Secretary, shutting down the reporter’s objection. “I’m not getting into a back-and-forth with you.”

KJP blocks her question and immediately moves on. pic.twitter.com/oNJuNZjyrP

“She’s asking a great question,” said Today Africa News journalist Simon Ateba. “You need to call people across the room! She has a valid question, she’s asked about the origin of COVID, and Dr. Fauci is the best person to answer that question.”

“I hear your question but we’re not doing this the way you want it,” Jean-Pierre replied.

Daily Caller's @DianaGlebova tries to ask Dr. Fauci about what he did to investigate the origins of covid and Jean-Pierre shuts her down.

Another reporter yells at her for not letting Diana ask the question. pic.twitter.com/RieiEBwl2p

“There’s finally some pushback to the administration’s narrative,” said Glebova.

Thank you to the other reporters in the briefing room that stood up for me. @stevennelson10 and @simonateba

There's finally some pushback to the administration's narrative.

“If there are oversight committees, I absolutely will cooperate fully and testify before the Congress have asked,” said Fauci in response to NBC’s Mike Memoli’s question regarding investigations proposed by Republicans in the next Congress. “You may not know, but I’ve testified before the Congress a few hundred times … we can defend, and explain, and stand by everything that we’ve said.”

In July, Fauci revealed his intention to retire by the end of President Biden’s term. However, in an August press release, Fauci changed course by announcing he would “leave” his positions in December to “pursue the next chapter of [his] career.”

“After more than 50 years of government service, I plan to pursue the next phase of my career while I still have so much energy and passion for my field,” wrote Fauci, clarifying he wasn’t “retiring.”

He added: “I want to use what I have learned as NIAID Director to continue to advance science and public health and to inspire and mentor the next generation of scientific leaders as they help prepare the world to face future infectious disease threats.”

Shortly after Fauci’s announcement, President Biden released a separate statement describing the NIAID director as a “dedicated public servant, and a steady hand with wisdom and insight honed over decades at the forefront of some of our most dangerous and challenging public health crises.”

“As he leaves his position in the U.S. Government, I know the American people and the entire world will continue to benefit from Dr. Fauci’s expertise in whatever he does next,” Biden wrote. 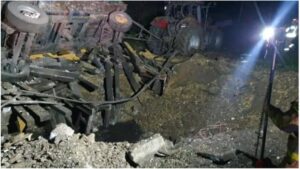