The Associated Press has fired the reporter who was behind a debunked Russian missile story.

The news wire had to issue a correction after “erroneously” reporting that Russian missiles killed two people in Poland earlier this month.

James LaPorta, the reporter behind the story, which relied on an “anonymous source,” was fired on Monday.

LaPorta’s report had cited “a senior American intelligence official who spoke on condition of anonymity” to claim that Russian missiles had crossed into Poland. In the correction, the news wire acknowledged that the missiles were “most likely fired by Ukraine.”

“In earlier versions of a story published November 15, 2022, The Associated Press reported erroneously, based on information from a senior American intelligence official who spoke on condition of anonymity, that Russian missiles had crossed into Poland and killed two people. Subsequent reporting showed that the missiles were Russian-made and most likely fired by Ukraine in defense against a Russian attack,” the correction, which was published last Monday, said.

Investigations by NATO and Poland have determined that it was a Ukrainian air defense missile.

When asked about the possibility of the missile coming from Russia last week, President Joe Biden told reporters that it did not appear to be the case.

“There is preliminary information that contests that,” Biden told reporters. “I don’t want to say until we completely investigate. It’s unlikely in the minds of the trajectory that it was fired from Russia.”

“There is no indication that this was an intentional attack on Poland,” Duda said last week. “There are many indications that it was an air defense missile that unfortunately fell on Polish territory.”

Duda added that there is “no proof at the moment that it was a missile fired by the Russian side.”

The accuracy of reporting on a story involving a possible strike on a NATO member is of dire consequence due to Article 5, which means that any attack against one member nation is considered an attack against all allies.

An AP spokesperson declined to identify LaPorta, but told The Hill that the “rigorous editorial standards and practices of The Associated Press are critical to AP’s mission as an independent news organization.”

“To ensure our reporting is accurate, fair and fact-based, we abide by and enforce these standards, including around the use of anonymous sources,” the spokesperson added.

“When our standards are violated, we must take the steps necessary to protect the integrity of the news report. We do not make these decisions lightly, nor are they based on isolated incidents.” 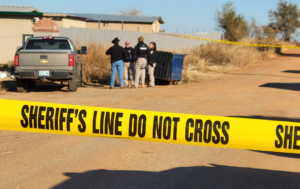