A hostage situation at a marijuana farm in Oklahoma has left four people dead and one injured.

Law enforcement is now seeking a man who is believed to have ties to the operation.

Around 7:45 PM on Nov. 20, law enforcement in Kingfisher County responded to a call about a suspected hostage situation on a 10-acre farm outside of Hennessey, about 55 miles from Oklahoma City. Officers who arrived at the property found four people dead from apparent gunshot wounds and one injured person, who was transported to a hospital. None of the victims’ identities and ages have been disclosed.

The suspect and all five victims are Asian and have ties to the marijuana farm. The attack is believed to have stemmed from an internal dispute. Law enforcement carried out a search of the property and came into contact with one person who is not believed to be involved.

The male shooter is believed to be at large. A warrant was issued for his arrest on Nov. 21. The suspect’s name or other identifying details have not been released.

“We’ve begun the process of figuring out where he may have gone to,” Kingfisher County Sheriff Dennis Banther told the local newspaper. Banther also said a Chinese interpreter was brought to the farm to assist with an interview of the uninjured witness.

The Oklahoma State Bureau of Investigation is assisting with the investigation.

“Investigators and crime scene technicians were able to begin more thorough work at about 3 a.m. when a search warrant was secured for two of the locations,” reports the King Fisher Time & Free Press.

While speaking with the media on Nov. 21, OSBI Captain Stan Florence said the people involved are related or are co-workers.

“There was … different housing units around, and it appears that there are people that live on the grounds here and work here,” said Florence, per News 9.

He added that the property’s owners are “international” and did not say if the farm’s license is current.

“We had drones and helicopters and manpower throughout the night. It’s in the early stages,” said Florence. “There’s a lot to unravel with this case. It’s going to take a little time to process it.”

“The industry quickly boomed, thanks to an open-ended law that put in place fewer restrictions than in other states,” reports CBS News.

Oklahoma Governor Kevin Stitt has not made a public comment regarding the quadruple homicide. 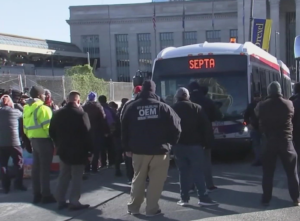 Second Bus of Illegal Immigrants Arrives in Philadelphia from Texas