Virginia Republican gubernatorial candidate Glenn Youngkin drew massive applause at a rally when he vowed to ban Critical Race Theory on day one, if he is elected.

Youngkin is facing off against former Democrat Governor Terry McAuliffe in Tuesday’s election. Polls have been too close for anyone to predict which way the state will go.

“Let me be clear, on day one we will not have political agendas in the classroom,” Youngkin said during a rally on the eve of the election. “I will ban Critical Race Theory.”

Huge Cheers From The Crowd As @GlennYoungkin Vows To Ban Critical Race Theory On Day One pic.twitter.com/pjSkqD0Fg9

While multiple states including Idaho, Texas, Tennessee, Arkansas and Oklahoma have banned CRT from public education, Loudoun County in Virginia has repeatedly publicly defended their use of it — making it ground zero for this portion of the culture war.

Youngkin also vowed to give parents a choice within the public school system.

“Today, Virginia has eight charter schools in the entire commonwealth, eight. Maryland has 140. North Carolina has 190, we have eight. We will launch 20 on day one,” Youngkin said.

A Monmouth University poll released last week found that education and schools ranked as the second most important issue in the upcoming gubernatorial race in the state.

Another recent poll conducted by Suffolk University/USA Today asked Virginia voters if they think parents or school boards should have more of an influence on a school’s curriculum.

In total, 50 percent of voters want parents to have more influence, while 39 percent favor the influence of school boards.

The divide on this issue is sharply partisan. Just 16 percent of Democrats think parents should have influence on a school’s curriculum — while only 12 percent of Republicans believe school boards should have the most control over the teachings.

Timcast will be closely following the election results as they come in and will provide updates as soon as they are available. 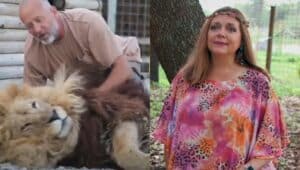 Tiger King Star Responds to Carole Baskin Lawsuit Against Netflix, Asks Timcast 'I Wonder What She's So Afraid of?'