'You Lost Your Eye For Weapons Of Mass Destruction That Didn't Exist': Alex Stein Confronts Dan Crenshaw In DC

Comedian, and BlazeTV contributor, Alex Stein confronted Texas Republican Representative, Dan Crewnshaw in Washington, D.C. over a tweet in a video posted to his Twitter account on Tuesday evening.

The Tuesday video shows Stein, who refers to himself as Prime Time #99, recording the Texas representative walking down a D.C. street in Stein’s direction.

“Dan!” the comedian exclaimed as he greeted Crenshaw. “Why are you retweeting Dave Portnoy who’s saying he wants me to fail, F me, why’d you retweet all that?” he continued, recording as he followed Crenshaw.

“Why do you think, Alex?” Crenshaw replied.

Stein casually joked about them both being from Texas before criticizing Crenshaw, “You’re just not America First. You’re a globalist, you’re giving more money to Ukraine.” Stein further provoked Crenshaw telling him he would not win his election this November, saying, “This guy’s a traitor.”

As Crenshaw reached a security blockade, Stein called out to him, “You lost your eye for weapons of mass destruction that didn’t exist, and you don’t even call it out.”

“Calling out Congressman @DanCrenshawTX for his inflammatory Retweets cussing me out and wishing for my failure!” Stein said in his tweet.

Calling out Congressman @DanCrenshawTX for his inflammatory Retweets cussing me out and wishing for my failure! pic.twitter.com/xF2QftmrS4

Stein has earned a reputation by showing up to city council meetings and advocating for typically mainstream policies in a showman-like manner in hopes to expose the absurdity of proposed policies.

His videos subsequently went viral after Stein posted them on his Youtube channel, where he also posts videos confronting activists and politicians. Most recently, in July, Stein recorded himself confronting New York Democratic Representative Alexandria Ocasio-Cortez on the steps of the nation’s Capitol and referred to her as a “big booty latina.”

The retweet in question was a response to an original tweet from Barstool Sports founder Dave Portnoy in late August, after sharing one of Stein’s videos at a Las Vegas City Council meeting. In the video, Stein speaks to City Council members about the dangers of gambling while telling a story about his alleged struggles with the sport. Barstool Sports shared the video on their Twitter account, and commented, “This is every man who spent a weekend in Vegas.” The video was reportedly deleted shortly after, according to Mediaite.

Stein noted the video had been deleted in a separate tweet criticizing Portnoy, “It’s so cute that @barstoolsports is owned by @stoolpresidente who is accused of the most heinous things but they are too afraid to keep my content up.”

Portnoy tweeted out shortly after Stein’s tweet, “I f—ing hate this guy @alexstein99 and will now actively root for his demise.”

I fucking hate this guy @alexstein99 and will now actively root for his demise. 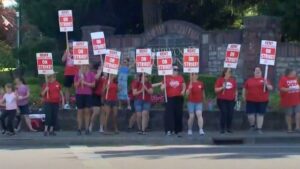