Lawmakers in Wyoming have proposed ending the sale of electric vehicles by 2035.

The proponents say the prohibition will protect the state’s oil and gas industry, a major part of Wyoming’s economy.

“The proliferation of electric vehicles at the expense of gas-powered vehicles will have deleterious impacts on Wyoming’s communities and will be detrimental to Wyoming’s economy and the ability for the country to efficiently engage in commerce,” states the bill, State Joint Resolution 4, which was introduced in the state senate on Jan. 13.

Wyoming is the second largest net energy supplier in the United States, producing 13 times more energy than it consumes.

It is also the number one producer of coal in the country and possesses two-fifths of America’s coal reserves at producing mines, per EIA. Wyoming is also the nation’s eighth-largest oil producer. In 2021, the state produced 85.43 million barrels of oil.

Wyoming has also invested in alternative energy, doubling its wind power since 2019. Wind-generated power currently accounts for 19% of the state’s net electricity.

Six state legislators are co-sponsoring the bill, which notes a number of challenges created by the widespread use of electric vehicles.

Additionally, “the critical minerals used in electric batteries are not easily recyclable or disposable, meaning that municipal landfills in Wyoming and elsewhere will be required to develop practices to dispose of these minerals in a safe and responsible manner.”

The move is in sharp contrast to efforts made by other states, including nearby California which set increasing goals for electric vehicle sales. The state government wants 35% of 2026 models of cars and light trucks to be electric, 68% for the model year 2030 and 100% for the model year 2035. California’s and Wyoming’s varying approaches to electric vehicles highlights the difference between a government led by the need of urban voters and a government led by the needs of rural voters.

As observed by Engadget:

People in many rural US states are rightfully mistrustful of so-called green technologies because they haven’t benefited from more recent technological shifts as much as their urban counterparts. Take the advent of the internet, for instance. In 2018, Microsoft found that many rural communities don’t have access to broadband internet. That’s something that has contributed to diminishing economic opportunities in those places.

State Senator Jim Anderson of Casper is one of the bill’s co-sponsors. He told Cowboy State Daily the intention of the legislation was to push back against the combustion-engine car bans in place in both California and New York.

“The Legislature would be saying, ‘If you don’t like our petroleum cars, well, we don’t like your electric cars,’” said Anderson.

“I’m interested in making sure that the solutions that some folks want to the so-called climate crisis are actually practical in real life,” said state Senator Brian Boner of Douglas, another co-sponsor, to the outlet. “I just don’t appreciate when other states try to force technology that isn’t ready.” 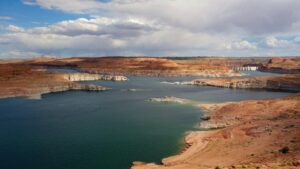 Scottsdale Cuts Off Water to Local Town Amid Drought