Scottsdale Cuts Off Water to Local Town Amid Drought

Scottsdale Mayor: 'The mega-drought tells us all — water is not a compassion game'

Residents in a suburb just outside of the Phoenix, Arizona metropolitan area are struggling to cope with extreme water cuts brought about by recent drought, which has limited the water supply coming into the city.

Homeowners in Rio Verde are resorting to skipping showers, flushing toilets with rainwater, and doing laundry at friends’ homes in an effort to conserve water.

The roughly 700 households in Rio Verde are largely dependent on water purchased from the nearby city of Scottsdale.

But, Scottsdale officials have now cut off the stand pipe supplying Rio Verde’s water, saying they need to conserve water for Scottsdale residents as part of the city’s Drought Management Plan.

In a statement released by the City of Scottsdale on Jan. 16, officials say Rio Verde is a community governed by Maricopa County, not Scottsdale. City officials also say they’ve warned Rio Verde for years of the potential for water cuts as part of its drought mitigation strategy.

Authorities have ceased allowing water haulers to transport water outside of the city, meaning the water haulers Rio Verde has relied upon need to find another source.

City officials added that Scottsdale have a 100-year supply of water certified by the Arizona Department of Water Resources and that the supply only covers “the city’s population buildout — it does not account for residents outside its service area who are not connected to the City’s water utility delivery system.”

“I do not understand, and do not in any way agree with, my predecessor choosing to keep this report from the public and from members of this legislature,” Hobbs said in a statement. “However, my decision to release this report signals how I plan to tackle our water issues openly and directly.”

Hobbs accompanied the statement with an executive order to establish the Governor’s Water Policy Council, which will enact measures to protect the state’s groundwater.

Much of the western U.S. faces the prospect of water shortages due to the falling water level of the 1,450-mile-long Colorado River, which supplies Arizona, California, Colorado, New Mexico, Nevada, Utah, Wyoming, and 30 tribal nations.

Last month, Scottsdale Mayor David Ortega addressed cuts to Rio Verde saying he would not be ruled by compassion over the city’s decision to ration water, telling local residents two weeks before Christmas, “There is no Santa Claus. The mega-drought tells us all — water is not a compassion game.” 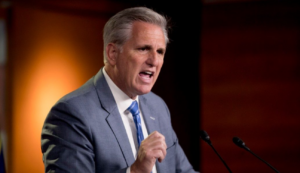 'Come Out Of The Dark': White House Urges McCarthy To Reveal Concessions