Republicans are narrowly favored to win both the Governorship and United States Senate seat in Wisconsin.

The numbers fluctuate when the responses are narrowed to only likely voters. While Johnson’s lead falls slightly to 2%, this data set put Michels and Evers in a dead heat.

All four candidates enjoy strong partisan support, which the majority of party members planning to support their candidates.

Marquette’s polls found that 95% of Democrats will vote for Evers and 98% will support Barnes.

Both Michels and Johnson are supported by 97% of Republicans.

Independents favor Johnson (53%) over the Democrat and Evers (47%) over the Republican.

“The race for Johnson’s seat — briefly considered a toss-up this summer as Barnes led in the polls but which the nonpartisan Cook Political Report now rates as ‘lean Republican’ —  is one of several that will likely determine control of the Senate,” reports The Hill.

Johnson was first elected to the Senate in 2010. During this year’s reelection campaign, Johnson has argued Democrats “are fundamentally destroying this country.”

“They have to be stopped. They need to be defeated. They need a real shellacking,” the senator said at a campaign event on Oct. 31.

While speaking in Milwaukee on Nov. 1, Barnes said the incumbent senator is “not just a danger to this state” but a “threat to the stability of this country.” He said Johnson downplayed the events at the US Capitol on Jan. 6 and is out of touch with middle-class voters.

“Barnes, like Democrats all across the country, has also tried to make the race a referendum on abortion rights,” reports Madison.com. “Johnson is a longtime supporter of an abortion ban without exceptions, a position Barnes calls ‘dangerous and out of touch.’”

Johnson has said he supports the decision being made by voters via a ballot referendum.

Abortion has also been a focus in the gubernatorial race.

Although he initially supported a total ban on abortions passed by the state legislature in 1849, Michels said he would support exemptions for pregnancies conceived through rape or incest. (The state’s current ban allows for exceptions to protect the life of the mother.)

Evers has refused to sign a bill creating exemptions to the ban because he believes the ban should be repealed entirely.

Additionally, both Barnes and Evers have attacked their Republican opponents for doubting the results of the 2020 presidential election.

Abortion, notably, is not a top issue for voters in Wisconsin. 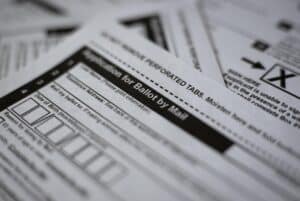