This is Why 40% of Employees Want To Quit

The workplace may have been the global pandemic’s most serious victim.

Microsoft surveyed 30,000 people in 31 countries and found 41% are considering quitting their jobs. This sentiment is shared by 54% of Generation Z — people born after 1997.

By contrast, Microsoft found 61% of business leaders reported “thriving,” which the World Economic Forum said could indicate they are out of touch with their employees’ concerns.

Microsoft CEO Satya Nadella said in the report, “Over the past year, no area has undergone more rapid transformation than the way we work … Employee expectations are changing, and we will need to define productivity much more broadly – inclusive of collaboration, learning and wellbeing to drive career advancement for every worker, including frontline and knowledge workers, as well as for new graduates and those who are in the workforce today. All this needs to be done with flexibility in, when, where and how people work.”

Microsoft’s findings have been recreated by other researchers.

In the wake of the pandemic, workers are worn out and have shifted their expectations regarding employment. In March, Prudential’s Pulse of the American Worker Survey found that 1 in 4 workers were considering quitting their jobs after the pandemic. Of the 2,000 employed adults surveyed, 72% say the pandemic caused them to rethink their skill sets. Many have rethought the role of the office: 42% of current remote workers said they would consider quitting if their company didn’t offer long-term remote work options.

In a report on the company’s findings, Prudential vice chair Rob Falzon said, “Our survey shows that American workers want the benefit of remote work, but still see value in coming together in-person at least some of the time. For Prudential, working nine-to-five, five days a week in the office will be a relic of the past. A hybrid workplace is better for our business and our employees.”

The quitting trend is not hypothetical. The U.S. Bureau of Labor Statistics reported that nearly 4 million Americans quit their jobs in April. This summer, a wave of videos emerged on TikTok of users quitting their jobs. Millions of people who watched these moments — spurred by stress, exhaustion, or more interesting opportunities — posted the tag #quitmyjob.

Lockdowns might have made leaving an unsatisfactory job a viable option for many people.

Slate’s Jordan Weissman wrote in June, “It likely helps that by staying in and collecting stimulus checks, Americans saved an enormous amount of money during the pandemic, giving them the breathing room to leave their job without a replacement lined up immediately. The extra financial cushion is probably giving some people the courage to try entrepreneurship out (the startup rate for new businesses shot up during the crisis and has stayed high into the past few months) or pursue a fun lark, like becoming a professional video game streamer.”

“As crude oil demand halted due to the Covid-19 pandemic, oil prices plummeted, making gasoline in the U.S. its cheapest in nearly 20 years. In April 2020, gasoline demand in the United States was half of what it was in April 2019. One year on, the price of gasoline has reached its highest level in 2021,” per Statista.

The Balance noted that the average household that commuted via car in 2019 “spent $2,094 on gas and motor oil, while total transportation expenditures reached $10,742.” This was an average of $29 a day on transportation before the hike in gas prices.

Additionally, the motor vehicle industry is feeling the strain of supply chain and labor shortages. In a chain reaction, a shortage of computer chips crippled the production of new cars, which caused a 10% price increase for used cars which were already in limited supply. Garages and repair shops report being extremely, busy but unable to get all the materials they need.

Moreover, public transportation does not present a reasonable alternative. Social distancing protocols and pandemic-related cleanliness standards have not been enough to convince commuters that buses, subways, and trains are safe. The nation’s largest public transit network, the Metropolitan Transportation Authority in New York, currently sees about 2 million passengers a day. This is a sharp decline from the 5.5 million daily passengers it averaged before the pandemic.

Workers may also not have reliable public transportation if they need to return to the office. PBS reports that “in a national survey from April 2020, the most widely explored solution to maintain social distancing was to simply increase service on particular routes to reduce overcrowding. But lower ridership and a smaller pool of available drivers during the pandemic has forced agencies to cut many bus and metro lines due to low turnout and a pool of fewer drivers.”

While working from home can erase work/life boundaries, productivity remained high even as the world shut itself down last year. After an initial scramble, employees have had to adjust to new remote circumstances.

Digital tools were essential to maintaining work last year when offices around the world closed. Microsoft’s survey found that “the average meeting is now 10 minutes longer and the average Microsoft Teams user is sending 45% more chats. There were an additional 40.6 billion work emails in February compared to February 2020. And time spent in Teams meetings has increased 148%.”

According to SalesForce, the average time spent with digital media is moving toward 7.5 hours per day. For many industries, technological advancements like virtual document sharing, email, and internet access made work more efficient, leaving employees to question why they spend so much time at the office.

The 9-to-5 workweek became standard in America in the 1900s with the federal government and Ford Motors adopting a schedule that still resembles modern office hours. Iceland, on the other hand, found that reducing the average workweek from 40 hours to 35 resulted in citizens feeling happier and having a better quality of life without a decrease in productivity.

The potential mass exodus could trigger a “talent war” where companies would need to compete to attract prime candidates. The professional recruitment field could essentially function like a buyers’ market, with desirable candidates in a better position to negotiate the terms of their employment. 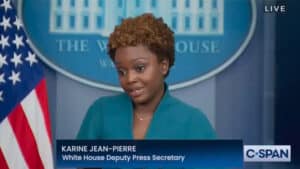 UPDATE: White House Says National Vax Mandate ‘Not Under Consideration at This Time’