A ‘White Lives Matter’ sticker that was placed on a campaign sign in Canada is being investigated as a “hate crime.”

The sticker in question was placed on a sign at a Hamilton bus stop for Ward 14 councilor candidate Kojo Damptey — who is black.

Damptey told the CBC that he had to “pause his door-knocking and campaign efforts” to peel the sticker off of the sign.

“This is a reminder of the things that are wrong with Hamilton and Canada,” Damptey said in a video posted to his Twitter account on Monday.

We are at Upper Paradise & Mohawk Rd West in #Ward14HamOnt cleaning up the vandilized bus ad with anti- Black racism and hate.
Thank you to the community for cleaning it up.#NoHateInTheHammer #HamOnt #HamiltonVotes2022 https://t.co/2D3cXNt6Os

The candidate continued on to say that “someone or some group of people take the time to put up an anti-Black and white supremacist message on the face of a bus ad. This speaks to some of the things we’ve been trying to bring attention to in this city. It’s unfortunate and we’ll see if we can find out who did it.”

We will continue to speak out against anti-Black racism & white supremacy in all its forms.

Thank you to community members that have reached out, are speaking out against this act, & removed the hateful message 🙏🏿
Signed KD#NoHateInTheHammer #HamOnt #HamiltonVotes2022 pic.twitter.com/MXlz6FP5QT

On October 11, Hamilton police spokesperson Jackie Penman confirmed to the CBC that the incident is being investigated as a “hate crime.”

“The incident was reported this morning. We believe it occurred sometime between Oct. 9-10,” Penman said. “Hate crime in Hamilton is not acceptable. Left unchecked, hate crime can have a far-reaching impact on communities. This is an ongoing, active investigation. Hate speech and all forms of racism have no place in our community.”

The City of Hamilton also responded to the sticker on Twitter, writing that people should report any “hateful messages on city property” that they may notice. The tweets also said that the vandalism will be removed by the city “as quickly as possible.”

We condemn racism in any/all forms and are committed to nurturing a city that is welcoming and inclusive, and where the community feels safe.

“We have been made aware of City property including transit shelters being vandalized with hateful and racist posters. These hateful acts and messages are unacceptable and will be removed by City crews as quickly as possible.”

Another tweet added, “We condemn racism in any/all forms and are committed to nurturing a city that is welcoming and inclusive, and where the community feels safe.” 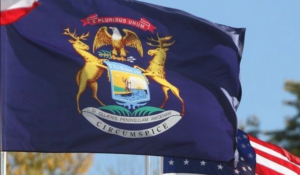