The White House will announce that FedEx, Walmart and UPS will be moving to round the clock service to address supply chain issues, according to reports.

The announcement is expected to come on Wednesday.

The carriers “will make commitments towards moving to 24/7 working during off-peak hours,” senior administration officials said in a call with reporters on Tuesday evening.

“The federal government will be a strong and willing partner in this effort in the near term but also in rebuilding a better system for the 21st century,” the officials said, according to a report from NBC News. “We’ll be working with stakeholders across the supply chain for a 90-day sprint to the end of the year to troubleshoot and alleviate many of the bottlenecks we can quickly address.”

The report added that “President Joe Biden will meet Wednesday with leaders of the Port of Los Angeles, the Port of Long Beach, California, and the International Longshore and Warehouse Union to discuss congestion at the ports. The White House will also meet with executives from Walmart, UPS and Home Depot about supply chain issues.”

Ports have been backed up for months due to COVID outbreaks and worker shortages. It has caused extreme delays in shipments from Asia and supply chain shortages across the US.

As Timcast previously reported, a whopping 82 percent of Americans are scared that supply chain issues and shortages will ruin their life plans — according to a recent poll. 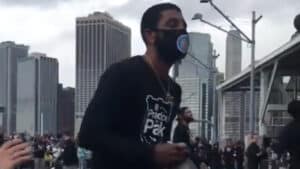