Biden administration allegedly using “every effort” to “deliberately” downplay the level of infection at the facilities.

On Wednesday, two whistleblowers accused members of the Department of Health and Human Services (HHS) of negligently allowing COVID-19 to spread rampantly throughout detention centers housing migrant children, and then using “every effort [to] deliberately” downplay the level of infection at the facilities.

Arthur Pearlstein, Director of Arbitration and of the Office of Shared Neutrals at the Federal Mediation and Conciliation Service (FMCS), and Lauren Reinhold, an attorney-advisor at the Social Security Administration (SSA), served as volunteer detailees at the Fort Bliss Emergency Intake Site in Texas from April through June in 2021.

The two whistleblowers claimed in their complaint, “COVID was widespread among children and eventually spread to many employees. Hundreds of children contracted COVID in the overcrowded conditions. Adequate masks were not consistently provided to children, nor was their use consistently enforced. Every effort was made to downplay the degree of COVID infection at the site, and the size of the outbreak was deliberately kept under wraps.”

“At a ‘town hall’ meeting with detailees, a senior U.S. Public Health Service manager was asked and refused to say how many were infected because ‘if that graph [of infections] is going to The Washington Post every day, it’s the only thing we’ll be dealing with and politics will take over, perception will take over, and we’re about reality, not perception,’” the complaint continued.  “All the manager would acknowledge is that several children had to be hospitalized.”

“The manager also dismissed a detailee’s concern that the children in the COVID tents were wearing basic disposable masks instead of N95 masks,” the complaint added. “The manager said N95 masks were unnecessary for the infected – even though uninfected detailees were working with the infected children.”

The complaint comes a month after a group of doctors working for the Department of Homeland Security (DHS) sent a letter to the Biden administration warning that detention centers “continue to be a significant source of spread for COVID and disproportionate harm to detainees, workers and the public, yet DHS has still not implemented a comprehensive plan to address the spread of COVID in immigration detention facilities.”

However, according to information obtained by Axios, 30% of illegal immigrants in detention centers are refusing the COVID-19 vaccine.  Axios reported, “Vaccine hesitancy among detained immigrants has added an unlikely twist to the challenges of a pandemic-era increase in border migration.”

According to data from ICE, there have been over 20,000 cases of COVID-19 among detainees and there are nearly 1,300 cases among the illegal immigrants currently in custody. 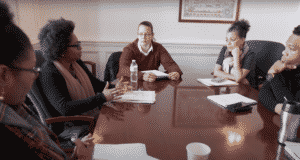