'You will receive the harshest penalty that the law will allow me to give you,' said Circuit Judge Kenneth Ballard

An 18-year-old in West Virginia who was convicted of murdering four family members will be eligible for parole in 15 years under the state’s mercy.

Gavin Smith was given a life sentence for the murder of his mother, Risa Mae Saunders, 39, his stepfather, Daniel Dale Long, 37, and his two younger brothers, Gage Ripley, 12, and Jameson Long, 3 in their Elkview home on Dec. 9, 2020. He was 16 years old at the time.

Kanawha County Circuit Judge Kenneth Ballard, who handed down Smith’s sentence on Jan. 17, said the execution-style murders were done “in cold blood” and that Smith deserved to spend his life in prison.

“This was a heinous crime,” Ballard told Smith during his sentencing hearing, per WV Metro News. “Your actions can only be described as an act of pure evil.”

Because Smith was a minor at the time of his killing spree, Ballard said he was obligated by state law to give him life with mercy.

“You will receive the harshest penalty that the law will allow me to give you,” Ballard said.

In August 2014, the West Virginia legislature passed a law prohibiting sending juveniles under the age of 18 to life in prison without mercy. The change required that juvenile offenders be given a parole hearing 15 years after completing their sentences.

The law was applied retroactively and made seven incarcerated men eligible for parole.

“I deeply regret what I did,” Smith told the judge during sentencing. “There’s days where I’d do anything to take it back.”

Smith’s former girlfriend, Rebecca Walker, is currently serving a 10-year sentence for being an accessory after the fact. Walker helped Smith hide at her grandmother’s house after the murders.

Walker testified at the Smith’s trial that she encouraged him to kill his family so that they could be together. She was 17 years old at the time.

John Sullivan, Smith’s attorney, said Walker was on a live video call that went black while his client killed his sleeping family. Sullivan has described the home Smith shared with his parents and siblings as a “pressure cooker” that was exacerbated by the COVID-19 pandemic.

“He was basically trapped in his household from a combination of his family’s rules and COVID shutting down the schools,” the defense attorney said. “Gavin wasn’t allowed to leave the house.”

“I think he regrets doing this. I believe he regrets the consequences that are going to come from it, but he’s also blamed others the entire way,” MacCallum said. 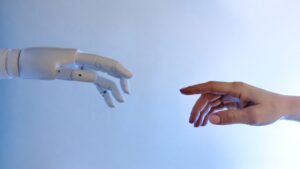 Artists Sue AI Generators For Copying Their Styles Without Permission