WATCH: Rep. Gaetz Says He Will Resign From Congress if Democrats Join Up to Elect a Moderate Republican Speaker

Florida Rep. Matt Gaetz said that he is so sure that Democrats will not vote to elect a moderate Republican House Speaker that he will resign from Congress if they do.

Rep. Kevin McCarthy had failed 11 votes for the position as of Thursday evening, primarily due to the House Freedom Caucus — of which Gaetz is a member. The 12th ballot is scheduled to take place on Friday at noon.

Gaetz is one of the most vocal members voting against McCarthy becoming House Speaker and discussed the issue during an interview with Fox News host Laura Ingraham on Thursday evening.

“Are you going to be OK, Congressman, will you be OK then if there’s ultimately a deal struck with moderate Democrats if Democrats kind of co-control committees? You’re fine with that?” Ingraham asked.

Gaetz began to reply, “No, absolutely not. That will not happen. There are two scenarios here —”

However, the Fox host promptly cut him off and said, “well, that could happen.”

“No, listen,” Gaetz responded. “I’m on the floor, Laura. These 212 Democrats are going to vote for Hakeem Jeffries every single time. He is a historic candidate for them. They are not going to cleave off under any circumstance.”

Then Gaetz promised to leave Congress if he was incorrect.

“If Democrats join up to elect a moderate Republican, I will resign from the House of Representatives” pic.twitter.com/UEIirVUco6

“I assure you if Democrats join up to elect a moderate Republican, I will resign from the House of Representatives,” Gaetz said. “That is how certain I am. I can assure your viewers that won’t happen.”

Gaetz said that he would be open to voting for Rep. Steve Scalise if he gave certain promises to the Freedom Caucus, but reiterated that his ideal pick would be Rep. Jim Jordan.

I will not be voting for Kevin McCarthy.

I resent the extent to which he utilizes the lobbyists and special interests to dictate how political decisions, policy decisions, and leadership decisions are made.

We have zero trust in him. pic.twitter.com/o53UhpDre2

Rep. Jordan has been repeatedly nominated but has not pulled votes from McCarthy.

McCarthy needs a majority of 218 votes to win. This means that only four Republicans can dissent. 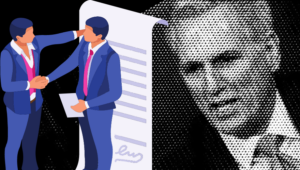