The two journalists hit Bourla with a whopping 29 questions while he was out for a stroll on Wednesday — all of which he refused to answer.

“Between Avi and I, we asked 29 questions. Everything we have been wanting to ask the Pfizer CEO for three years — from how much he has personally profited from the pandemic, to how much he has paid others to promote his vaccines, to important questions about when he knew his vaccines didn’t actually stop transmission, and why he kept it a secret,” Levant wrote on Rebel News.

Bourla told Levant to “have a nice day,” and declined to answer.

WE CAUGHT HIM! Watch what happened when @ezralevant & @OzraeliAvi spotted Albert Bourla, the CEO of Pfizer, on the street in Davos today.

We finally asked him all the questions the mainstream media refuses to ask.

“I won’t have a nice day until I know the answer. Why did you keep it a secret that your vaccine did not stop transmission?” Levant continued to press.

At this point, Yemini joined in and asked, “is it time to apologize to the world, sir? To give refunds back to the countries that poured all their money into your vaccine that doesn’t work, your ineffective vaccine? Are you not ashamed of what you’ve done in the last couple of years?”

“Are you proud of it?” Yemini continued. “You’ve made millions on the backs of people’s entire livelihoods. How does that feel to walk the streets as a millionaire? On the backs of the regular person at home in Australia, in England, and Canada?”

It was quickly apparent that the duo wasn’t getting any answers from him, but they continued to ask anyways.

“How much money have you personally made off the vaccine?” Levant continued.

Yemini came in hard, asking, “how many boosters do you think it’ll take for you to be happy enough with your earnings?”

If Congress or the Media had been doing their jobs, the CEO of Pfizer would have been asked these questions over a year ago. https://t.co/LcDuBehPew

Rep. Thomas Massie weighed in on Twitter, quote-tweeting the video and writing, “if Congress or the Media had been doing their jobs, the CEO of Pfizer would have been asked these questions over a year ago.” 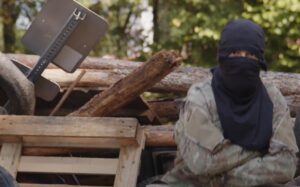 'Make Them Pay': Protesters Opposing Construction of Atlanta PD Training Facility Call For 'Retaliation' After One Was Shot By Police