On Oct. 24, New York Freedom Rally, in conjunction with Black Live Matter Greater New York, held a protest outside of the Barclays Center ahead of the Brooklyn Nets’ first home game.

The message conveyed by the protesters, which numbered around 200, was simple: “Let Kyrie Play.”

Kyrie Irving, a seven-time NBA All-Star and 2011 Rookie of the Year winner, was terminated from his team after refusing to get vaccinated.

“Kyrie Irving will not play or practice with the team until he is eligible to be a full participant,” Nets general manager Sean Marks said on Oct. 12. “Kyrie has made a personal choice, and we respect his individual right to choose. Currently the choice restricts his ability to be a full-time member of the team, and we will not permit any member of our team to participate with part-time availability.”

While no injuries were reported at the protest, the situation did take a forceful turn when Hawk Newsome, co-founder of BLM Greater New York, led an initial charge to break through the security gates.

Elad Eliahu was on the scene to speak with protesters about the impact of forceful protest tactics, the medical segregation imposed by the New York City government and the critical importance of bodily autonomy and sovereignty. 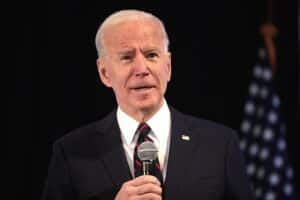