On Sept. 26, New York City Democratic Socialists of America’s Ecosocialist Working Group gathered outside Sen. Chuck Schumer’s office to pressure the lawmaker into passing the Green New Deal for Public Schools Act. The legislation, proposed by Rep. Jamaal Bowman (D-N.Y.), aims to invest over $1.4 trillion in public schools over the course of a decade.

“If enacted, the legislation would fund 1.3 million jobs per year and eliminate 78 million metric tons of CO2 annually,” Bowman said in a July 15 statement, calling for “a revolution in public education.”

About 100 protesters appeared at the rally near Bryant Park, where Elad Eliahu was on the scene to speak with them about the controversial possibility of nuclear energy as a solution to climate change, the perceived role of capitalism as a driving force behind global warming, and the possible impact of climate change on public education. 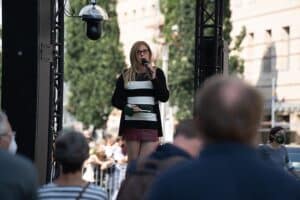