WATCH: Man Arrested at Panera Bread in Brooklyn For Attempting to Eat Without a Vaccine Passport

A video is currently going viral of a man being arrested for attempting to eat at a Brooklyn, New York, Panera Bread without a vaccine passport.

Timcast has confirmed that the incident occurred at the Panera Bread location in Gateway Center.

Independent photographer Leeroy Johnson captured a video of the incident. He wrote that the man arrested is an activist and Army veteran who was also arrested twice last week for trying to order food.

“Activists against mandates was just arrested at Panera Bread in Brooklyn NY that’s for the Vaxed only , the Same man was arrested 2 times last week for trying to order food. He’s the army veteran,” Johnson tweeted with video of the arrest.

“The constitution of the United States is being violated,” the man said as he was swarmed by multiple police officers.

Timcast spoke to a manager at the café who refused to comment on the incident.

“Nope. Sorry honey. Nope. No comment. No. Thank you,” the manager said before hanging up the phone.

Mayor Bill de Blasio has implemented a “Key to the City” vaccine passport program for indoor dining, fitness, and entertainment. The mandate applies to everyone over the age five, and now requires two vaccine doses for New Yorkers over age 12.

“New York City will not give a single inch in the fight against COVID-19. Vaccination is the way out of this pandemic, and these are bold, first-in-the-nation measures to encourage New Yorkers to keep themselves and their communities safe,” said Mayor de Blasio in a statement earlier this month. “From workplace mandates, to $100 incentives, to mobile and at-home vaccination offerings, no place in the nation has done more to end the COVID era. And if you have not taken this step yet: there’s no better day than today to stand up for your city.” 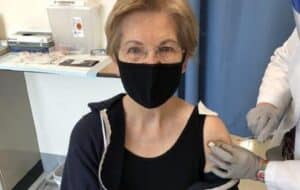