According to court documents released Thursday from Santa Fe County, New Mexico, a search warrant has been issued for actor Alec Baldwin’s cell phone in connection with the fatal shooting of Halyna Hutchins on the set of the film Rust.

The judge overseeing the case signed the warrant stating that Baldwin must turn over the phone.

Investigators are working to obtain messages, call logs, digital photos and videos, and any private messages sent on social media platforms related to events of the tragedy on the set of Rust. They are also looking to secure any deleted videos, photos and messages related to the circumstances that may be on the device.

After rumors began to circulate, Alec Baldwin denied that he requested a larger Colt gun before the fatal shooting of Halyna Hutchins.

The actor tweeted an article from Newsweek which claimed that he had requested a larger gun before the fatal shooting.

“This, in fact is a lie,” Baldwin wrote. “The choices regarding any props by me for the film RUST were made weeks before production began. To suggest that any changes were made ‘before fatal shooting’ is false,” he added.

Tweets from the actor’s account are now marked as private and no longer available for public view.

Hutchins was fatally shot on Oct.21 during a rehearsal for a scene. Director Joel Souza was also injured in the shooting.

The scene intended to show Baldwin’s character cocking the gun, and he and Hutchins were reviewing how she wanted to position his hand right before the gun went off. The actor gave a detailed account to ABC’s George Stephanopoulos earlier this month.

When asked why he pointed the gun at Hutchins and pulled the trigger, Baldwin said, “I would never point a gun at anyone and then pull the trigger. Never.”

“We are confident that the evidence will show that Mr. Baldwin is not responsible civilly or criminally for what occurred on October 21, and he continues to cooperate with authorities,” Aaron Dyer said in his statement reported by ABC News. “We proactively requested that the authorities obtain a warrant so that we could take steps to protect Mr. Baldwin’s family and personal information that is clearly unrelated to the investigation.” 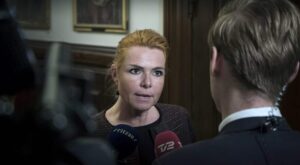