Swedish automaker Volvo Trucks has begun testing a hydrogen fuel-powered electric truck that produces its own electricity, has a range of 621 miles and only emits water vapor.

“We have been developing this technology for some years now, and it feels great to see the first trucks successfully running on the test track. The combination of battery electric and fuel cell electric will enable our customers to completely eliminate CO2 exhaust emissions from their trucks, no matter transport assignments,” Roger Alm, President of Volvo Trucks said in a press release.

These fuel cell electric trucks have an operational range comparable to many diesel trucks currently in use. They also have a refueling time of less than 15 minutes and can generate 300kW of electricity onboard. 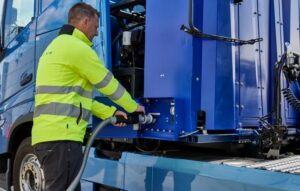 “Hydrogen-powered fuel cell electric trucks will be especially suitable for long distances and heavy, energy-demanding assignments. They could also be an option in countries where battery charging possibilities are limited,” says Roger Alm.

The company says that customer pilots will begin a few years from now and commercialization will start some time after 2025. This ostensibly gives countries like the United States time to expand their network of hydrogen fueling stations. Even if Volvo were to rollout their fuel cell electric trucks today, the U.S. would be unprepared.

In mid-2020, there were only 43 retail mobile hydrogen fuelers, according to the U.S. Department of Energy. The majority of those were located in California.

But long-haul trucking operations that run fuel cell electric vehicles may not need to use such stations. They may be able to use private fleet fueling stations, which require fewer locations or — depending on distance or other factors — just a central location to meet the needs of a specific fleet, according to the Energy Department.

“We expect the supply of green hydrogen to increase significantly during the next couple of years, since many industries will depend on it to reduce CO2. However, we cannot wait to decarbonize transport, we are already running late,” said Alm. “So, my clear message to all transport companies is to start the journey today with battery electric, biogas and the other options available. The fuel cell trucks will then be an important complement for longer and heavier transports in a few years from now”