Kathy Davies, who finally received ivermectin on Dec. 13, has been hospitalized with COVID-19 since October

A Virginia hospital has been issued a contempt of court order after refusing to administer prescribed ivermectin to a COVID-19 patient.

Kathy Davies was admitted to Fauquier Health Hospital in October with the virus. On Nov. 3, she was put on a ventilator in the ICU.

Her husband and children have been trying for weeks to have Kathy treated with Ivermectin.

According to the National Institute of Health, “there is insufficient evidence for the COVID-19 Treatment Guidelines Panel (the Panel) to recommend either for or against the use of ivermectin for the treatment of COVID-19.”

Citing medical, legal, and practical concerns, Fauquier Hospital refused to treat Kathy Davies with the drug. Kathy had been prescribed the drug by the family’s physician, Dr. Martha Maturi.

Ultimately, the Davies family sought to legally compel the hospital to treat the 63-year-old with the drug.

Court documents state that the hospital refused to admit one of her sons and a registered nurse to the ICU to administer the drug on Dec. 7. Maturi was also blocked from treating the woman on several occasions by the hospital.

On Dec. 10, after one week and four court hearings, a court agreed the family could compel Fauqeir to administer the drug.

“I get it. The doctors at the hospital are afraid. This has become politically charged,” Kathy’s son Christopher Davies said in an interview regarding the legal battle. “I’m not trying to go after the hospital. I just want them to use it in hopes that it will help.”

The hospital, which did not comply, has said it made a good faith effort to follow the court’s ruling and that Maturi did not have privileges to practice at the hospital.

On Dec. 13, the 20th Judicial Court of Virginia ordered the hospital to administer the dose of Ivermectin by 9 P.M. that night. Failure to comply would result in a $10,000 fine for the hospital each day that the patient went without the medication, beginning the count on Dec. 9.

“No good reason or good cause was given, other than convenience, for the need of a formal ‘attending physician’ when there are at least three physicians involved in the patient’s care,” the contempt order stated. “The relief herein can be accomplished without requiring anyone serving in the role of ‘attending physician.’”

Fauquier Hospital complied on Dec. 13, when Maturi was admitted to the ICU and administered ivermectin to her patient at 8:46 P.M. Kathy Davies will still receive other treatments, which will be administered by Maturi.

While Judge Fisher vacated the order of contempt on Dec. 14, it is not clear if the hospital will pay a fine for the four days Kathy Davies went untreated. 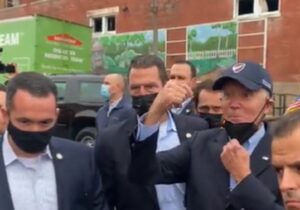