Twitter users noticed an image featuring a “high-caliber bullet” used in a recent Vice News article appeared to be staged.

Vice News‘ article in question, “Inside El Chapo’s Son’s House After a Deadly Gunfight” discusses an early morning raid my Mexican military which led to the capture of El Chapo’s son, Ovidio Guzmán.

The article features an image of a bullet penetrating what appears to be a fence.

“A HIGH-CALIBER BULLET POKED AT ONE OF THE GATES OUTSIDE OVIDIO GUZMÁN’S HOUSE IN JESÚS MARÍA, SINALOA,” reads the caption which credits Vice World News’ José Betanzos.

Users claimed the image appeared to be staged, noting the bullet was still in it’s casing.

“Can you spot what’s wrong with this picture?” asked former Libertarian party presidential candidate Austin Peterson in a Monday tweet.

Can you spot what's wrong with this picture? pic.twitter.com/ItqdIaRqwm

“Anyone who’s EVER been around a firearm for half a second, immediately recognizes what’s wrong here,” noted one user. “Fake news. Every day.”

“Ok, it thought it was a fake. But this caption really comes from a Vice News article. Whoever wrote it clearly doesn’t understand how a gun works at the most basic level and did not realize someone (l’d bet on a bored soldier) stuffed an unfired/dud cartridge in a bullet hole,” wrote one user.

The original poster (OP) suggested the bullet was a 5.56 round but was difficult to discern without comparable scale within the image.

“But you know what Joe says, right? It will totally blow out your lungs…” the OP responded, referencing a May 2022 comment from President Biden.

“The absolute SHAME in all this? There are people who will actually believe it,” said another user.

“Did the reporter put the unfired bullet in that hole for the pic?” wrote the Hodgetwins. “C’mon.”

Did the reporter put the unfired bullet in that hole for the pic? C’mon 🤣 pic.twitter.com/OeJqe4gEzw

“S— like this is just [one] example of why nobody trusts the media anymore,” the Hodgetwins continued in a separate post.

“Luis this is a bullet that hasn’t been fired,” said another user in response to the article’s author.

“How did the shell casing make it out of the rifle barrel with the actual projectile, all in tact after being fired?” another user similarly asked the author.

Another user believed the image and accompanying caption was a meme.

We honestly thought someone was making a meme out of @VICENews, until we saw this in their article.

“There’s not one person at [Vice News] that knows how a bullet works?” another user said. “Tf is this ‘journalism.'”

Vice News has not addressed the image as of Tuesday afternoon. 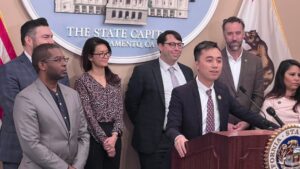