Between August 13 and August 29, more than 35,000 veterans called the VA's suicide hotline

More than 35,000 veterans called the VA’s suicide hotline during the final two weeks of America’s withdrawal from Afghanistan.

Veterans Affairs data provided to The Washington Examiner show a sharp spike in calls between August 13 and 29, when “the U.S. military and coalition forces were embarking on what would become one of the largest airlifts in history as they worked around the clock to evacuate foreign nationals and Afghan allies who could be at risk under the Taliban regime.”

“There was an average of 2,060 calls a day during that time frame, with the most, 2,570, occurring on Monday, Aug. 16, when Kabul fell under Taliban control,” the Examiner adds.

According to information from the Pentagon, more than 800,000 Americans have served in Afghanistan since October 2001. The Department of Defense reports that 2,352 American service members died there and over 20,000 were wounded, per Fox News.

In a letter to letter to Veteran’s Affairs, Senator Jerry Moran wrote that there was an 11% uptick in calls to the crisis line since August 15. His public letter asks Denis R. McDonough, the Secretary of Veterans Affairs, how the military plans to support those veterans and service members struggling in the wake of the events in Afghanistan.

Moran posed the following six questions to McDonough, requesting a reply by September 13, 2021:

Moran, a Republican from Kansas, wrote, “We know that the worsening situation for our Afghan allies will negatively impact many of our military veterans, and it is our duty to provide adequate support for those veterans as our country grapples with the fallout from our withdrawal from Afghanistan.”

Army reserve psychologist Nicole French told Fox News that it was normal and expected that veterans would have an emotional reaction to what occurred in Afghanistan.

“People are remembering [and] making sense of their own lived experience,” she said. 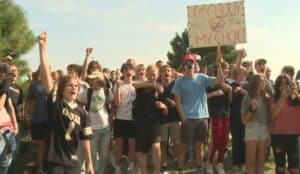